In a Dark Wood: A Novel 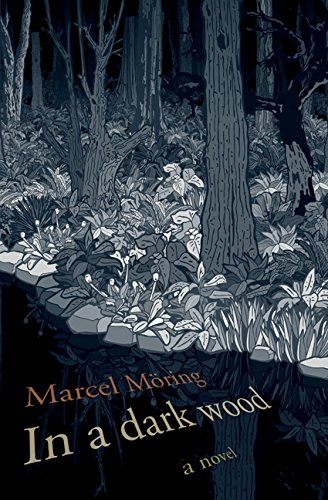 Marcel Möring’s In a Dark Wood is a highly literary, imaginative, and experimental novel that explores large themes—including Jewish identity after the Holocaust and the search for meaning amid the emptiness and rewards of middle-class existence—in inventive ways.

Möring is a fine prose stylist, and much of the book is compelling, but it is also uneven. Despite the formal variation which helps keep the reader alert there are places where the narrative meanders—and so too did this reviewer’s attention. Another small quibble is that the British diction will remind American readers that this is a foreign work in translation, and in at least one section the excessive use of the past perfect tense was annoying.

Möring’s formal devices include various stylistic, graphic, and typographic experiments. These include: pages preceding chapters with increasing numbers of concentric circles (representing Dante’s circles of Hell); spacing text on the page in the manner of open form poetry; a page of nouns that are arrayed on the page like stars in constellations; typing three or four words as one word without spaces to denote emphatic declamation; representing a masturbatory ejaculation with the word “splat” in a much larger comic strip style font; the first paragraph of the book which begins and ends with ellipses between which is a long and powerfully descriptive run-on sentence; a 12-page chapter comprising a single paragraph that itself is a single run-on sentence with minimal punctuation; and an eight-page graphic chapter (graphic as in the form of a comic strip). Some readers may consider these devices mere gimmicks, but they can also be viewed as evidence of Möring’s boundless creativity.

We meet the novel’s main character, Jacob Noah, in May 1945 as he crawls, covered in mud and soil, out of the hole in which he was hiding from the Nazis for the past three years on a farm outside his hometown of Assen, in northeast Holland. He indignantly reclaims his family’s cobbler shop/shoe store from the Dutch Nazi who had turned it into an Aryan bookstore, eventually confirming that his deported parents and younger brother were murdered in the Holocaust.

Noah marries the daughter of the farmer who saved him and has three daughters, Aphra, Bracha, and the mathematically gifted Chaja (in Dutch the letter J is pronounced as a Y). Then he divorces his wife and turns his daughters against her because he doesn’t want to be the only Jew in a family of gentiles. In the public sphere he is admitted to the business association that had excluded his parents, expanding his business into a department store and eventually getting out of retail to become a local real-estate tycoon—all within the first 60 pages.

To the “money can’t buy happiness” motif is added the Holocaust survivor’s feelings of loss and sense of guilt. Noah has numerous affairs, but his material success leaves him emotionally empty; the only women he ever loved were his mother and his daughters. On page 69 Noah dies in a car crash at age 60, but like the deceased characters in Neil Gaiman’s American Gods, he continues living; here the story turns to fantasy.

Möring has said he intended this novel to be an homage to early twentieth century modernist fiction, a kind of Modernism 2.0. One of the characteristic features of modernist literature is the use of mythology as a kind of palimpsest upon which a new work is fashioned. Möring’s templates include Dante’s Divine Comedy (from which the title of the novel is derived), Joyce’s Ulysses, and Joyce’s template The Odyssey. The forest that surrounds Assen becomes for Noah the forest through which Dante entered Hell, and his Virgil is an early twentieth century peddler called the “Jew of Assen.” Though their paths cross only briefly, his Stephen Dedalus is Marcus Kolpa, an emotionally repressed and insecure, introspective Jewish writer and intellectual who has not realized his vocational potential and who once dated and still pines for Chaja. Möring’s portrayal of Kolpa’s interior life keenly captures the thought processes of a brainy introvert. Noah’s Bloomsday is June 27, 1980. On the last Saturday of every June, Assen’s population increases fivefold as it hosts a famous motorcycle race. Bikers, their girlfriends and groupies, and thrill seekers from all over Europe gather for a weekend of drinking, fighting, and promiscuous sex. This bloated, degenerate Assen is Noah’s Inferno and his Dublin.

In addition to Noah and Kolpa’s narratives and backstories, we are introduced to the latter and Chaja’s circle of friends including the photographer who is Kolpa’s interlocutor in the graphic/comic book chapter, and an assortment of unrelated characters, such as the Italian owner of a strip club, and the town undertaker to whom an entire chapter is devoted—perhaps to show that gentiles also experience middle-class malaise and existential despair albeit without the backdrop of communal catastrophe. Such chapters may seem like a digression, or they may remind American readers of Sherwood Anderson’s stories in Winesburg, Ohio. Möring, who grew up Jewish in Assen, captures the town’s provinciality and bourgeois conformity. He also shows the predicament of a minority that lacks sufficient numbers to sustain itself as a community.

In a Dark Wood is a flawed but nonetheless important work that cannot be adequately appreciated after a single reading. To gain the utmost enjoyment from this work, a solid command of the western literary canon is advised.