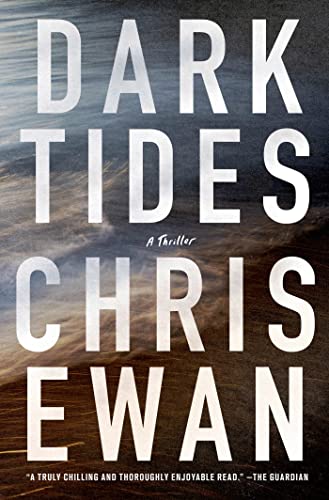 “Suspense fans will love it.”

Chris Ewan blends love, betrayal, and redemption together with a mysterious disappearance to create a gripping novel of suspense set on the Isle of Man.

When Claire Cooper is eight years old her mother disappears during Hop-tu-naa, the version of Halloween celebrated on the Isle of Man. Despite the fact the island is only 14 miles wide and 32 miles long, has a population of only 80,000 people, and everyone knows everyone else, Claire’s mother vanishes without a trace. The police eventually give up searching and the case goes cold. Claire is certain that her mother’s employer, millionaire Edward Caine, killed her.

Claire has always feared Edward Caine, is even frightened by his mansion. “I could have been standing in front of the Caine mansion on a bright and warm summer’s day and I’d still have experienced the same penetrating chill, the same pulsing sense of unease . . .”

Claire’s reaction to Edward Caine is even more visceral. His eyes “round and bulging. Amphibian, somehow. The whites were a damp, sickly yellow, the pupils like shattered marbles. When he blinked, the skin of his eyelids seemed to be stretched so thin that it was almost sheer.”

Ignoring Claire’s fear of Edward Caine, her mother insisted that Claire visit the old man and sing the traditional Hop-tu-naa song. A very reluctant Claire complies, then is hurried home by her mother who has to return to the Caine mansion for some late night work. She is never seen again.

Still unreconciled to her mother’s disappearance, Claire at 14 is befriended by five teenagers, all a little older than herself. She is never sure why the five—David, Cullum, Scott, Rachel, and Mark—decide to include her in the group, but Claire accepts. “I was lonely, an outcast in some ways . . .” It is a decision she comes to regret.

Each Hop-tu-naa the five teens and Claire celebrate by performing dares. Each year a different member selects the dare, mostly harmless pranks, until one year Mark and David select a dare that turns into violence. Mark, the outsider, the “bad boy” of the group, is arrested for the brutal attack on Edward Caine, and sentenced to prison. The others, including Claire, let Mark take the blame. No one comes forward to defend his actions. It is a decision that changes Claire’s life.

Although she wants desperately to be a teacher, Claire instead joins the police force on the Isle of Man. Mark is in prison “. . . paying his debt to society, and I felt that it was time for me to pay mine.”

The group had drifted apart, only seeing one another in passing, until one Hop-tu-naa when Scott, dear reckless Scott, is killed in an apparent accident. No one questions Scott’s death in a car accident. He was a very bad driver, after all. But Claire didn’t believe it, not when she saw the shoeprint in the back seat of Scott’s car, the footprint that pointed toward the door. On Hop-tu-naa a family would spread ashes on the hearth. If a footprint appears in the ashes the next morning, it meant either prosperity or death, depending on which way it pointed.

The next year on Hop-tu-naa another of the friends dies in a freak accident. Again Claire finds a footprint at the scene. Someone is murdering the friends one by one, and it most certainly has to do with the attack on Edward Caine years before. Is it Caine who is orchestrating the murders, or is it a member of the group who wants to make sure no one ever talks? But why now? Why wait so many years?

Whoever it is, Claire knows she must uncover the murderer before he makes her the next target.

Dark Tides by Chris Ewan is well written and tightly plotted, and the sense of place evoked is, well, spooky—as it should be for a novel whose action takes place on Halloween. Ewan tells his story in a series of flashbacks, a difficult narrative technique that he uses brilliantly. The only flaw, and it is very minor, is that Claire repeats herself a little often about how she should have made different decisions. Otherwise the book is worth five stars. Suspense fans will love it.