Dark Things I Adore: A Novel 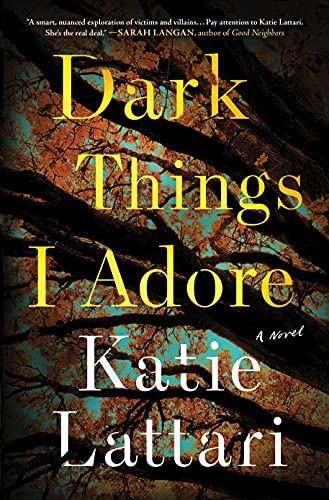 “Filled with characters of questionable morality and multiple timelines, Dark Things I Adore makes for a thrilling read.”

Starting out set in 2018, Lattari introduces Audra Colfax, a young genius earning her graduate degree at the Boston Institute for the Visual Arts. Lattari also introduces us to Max, her handsome, if rakish, professor, a man used to getting what he wants from the women in his orbit.

After learning that Audra and Max are heading into rural Maine for the weekend, and the possibility of consummating their as-yet-untested attraction, the narrative shifts gears to 1988.

“Juniper” is also in rural Maine, on her way to the Lupine Valley Arts Collective, where she teaches workshops.

The teaching artists above the students above the staff, overseen by the photographer/owner, who names each instructor and student with an often plant-driven nickname, providing proof of insider status.

The Camp-named Juniper is fresh from a breakup when she arrives, relieved to be in a familiar place where she can heal and regroup. “I was speeding through New Jersey before it registered that I have no home to go back to once the job is over. I lived in her apartment.”

Two sets of characters, engaged in art and complicated personal dynamics in rural Maine, but no other indicators about how those lines converge.

But converge they will and while the reader may race ahead of the characters at times, making connections between the past and present the characters are slow to discover, the deliciousness of Lattari’s suspense is less about that and more about how things will unfold once each character catches up.

Multiple points of view allow Lattari to juxtapose how others see each other with how they see themselves.

As in one of Max’s chapters, “When Audra parks the car at her house and we get out, I am singularly focused. I am a wolf. I am vile. Wicked. . . . All I want is for Audra to yield to me.”

While simultaneously, as illuminated in the next chapter, Audra thinks of him, “Is he lost in a whirlwind of want and possibility as he sees and understand that I am finally ready to let him in? What a joke.”

Back and forth, events occur through first Audra, then Max’s eyes. Knowing the discrepancy between their expectations fosters the question, At what point does this all explode and who will survive the blast?

Lattari intersperses the active scenes in the two timelines with Audra’s thesis project. Descriptions of mixed media, built in part from found objects, the meanings of which become clear as the story unfolds.

“Piece #1: I Remember It Stark

What starts as a curiosity, turns into clues and ultimately reveals a character. “Note on a yellow sticky note found pressed between the pages of the family cookbook in the Dunn kitchen.”

The titles of the artwork, followed by description, and the words incorporated from the found materials.

"Will anyone EVER find my HAUNTY little scrawlslip in with the beef wellington?”

Signed always with the date and initials CD.

The implications of the artwork build a greater picture than the actions of the characters on their own.

Other artists inhabit both timelines. The other students and faculty, some of whom know Max intimately in 2018. In 1988, the other instructors and staff at the retreat, from Mantis to Coral to Moss to Zephyr, the artistic temperaments and townie contempt combine in a toxic mix.

But who is the victim? And what is the crime? Even if that becomes clear before the end, Lattari has a few more tricks up her sleeve, with a twist or two enough to satisfy.

Filled with characters of questionable morality and multiple timelines, Dark Things I Adore makes for a thrilling read.