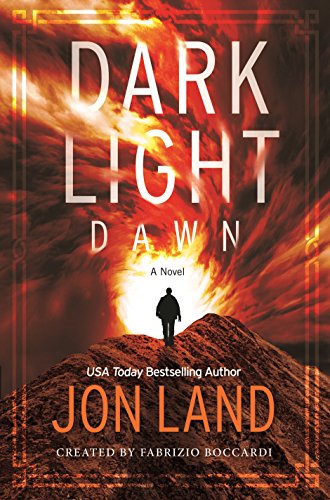 “a danger-fraught and compelling thriller with a world-threatening premise . . .”

The Yucatan, 1990: two young men stake their lives, fortunes, and reputations on finding gas and oil. Dale Denton is success-driven and ruthless, a man stopping at nothing to get what he wants. Ben Younger wants success, also, but not at the expense of others. Friends since college, they’re both married but childless, Ben because his wife is infertile, Dale because his wife’s drinking habits cause miscarriages.

Everything changes when the extraction pumps stall. Ben goes into the excavation to determine why and discovers an odd darkness-emitting rock.

“The feed line jerked downward. Ben flailed desperately. He was trying for the ledge, to save himself from falling, when his outstretched hand closed on the glowing rock.”

Ben is left with a sigil-shaped scar, but the oil begins to pour. He and his partner achieve their goal, for better or worse.

Shortly afterward, a miracle occurs in the form of fatherhood. Ben’s son and Dale’s daughter are born on the same day in the same hospital. They share the same blood type, one of the rarest among humans. Young Max also has a birthmark exactly like the scar the rock left on his father’s hand.

As the children grow, Dale orders Ben to keep his son away from Victoria because the two have an odd affinity. His hostility leads to an event estranging him from Victoria while sending Max running for his life.

Then a terminally ill Ben takes a header out a 60-story window after being accused of embezzlement. Ben’s destitute wife is confined to a mental institution, and Dale is free to run their empire his way.

What he doesn’t know is that Ben’s son will soon be back in his life. His estranged daughter is also about to enter the picture, along with a priest, a representative of the Vatican, and a new terrorist group. Drawing them together is a plague running rampant in the Yucatan, beginning near where Ben found the dark stone.  Simultaneously erupting in the Near East, the sickness decimates villages, turning the survivors into living stone.

In the midst of the horror of biological warfare, two young people forced apart again meet in an official capacity, realizing their feelings for each other still exist. Max will discover secrets he never expected, as well as power within himself, and an explanation of why he manages to escape any deadly situation he’s in, as well as what this means to his relationship with Victoria.

This is definitely a danger-fraught and compelling thriller with a world-threatening premise. Nevertheless, the use of so many locales as well as the back and forth switches between the past and present may present a challenge to some readers in maintaining their reading equilibrium.

While it’s supposed Max and Vicky would be considered the main focus of the story, after their fathers, there are so many other strong characters at the center of attentiont that at times becomes blurred. As the threads of each subplot are woven together, there is simply too much going on for the reader to take it in at one sitting. Indeed, if this were a film, it might require several viewings to grasp and absorb all the intimations and nuances present.

There isn’t an ending per se but merely a drawing to a close of this section of the first entry in this series, with the last chapter leading into the introduction to the next phase of Vicky and Max’s lives.

How long will that sensation last?

It’ll be interesting to see where it leads them and what they face in the aftermath of Dark Light: Dawn.