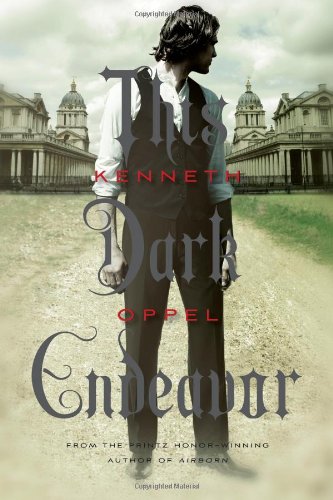 “Mr. Oppel writes a book that is both fascinating and unique as he creates Victor Frankenstein’s early life in a way never before told.”

This Dark Endeavor: The Apprenticeship of Victor Frankenstein unquestionably lives up to its claim as the prequel to Mary Shelley’s classic story.

Mr. Oppel populates his novel with younger versions of the same characters as Shelley’s book: Victor Frankenstein and his two younger brothers, Ernest and William; feisty Elizabeth Lavenza, a distant cousin adopted by the wealthy Frankenstein family; and close friend, Henry Clerval; however, Dark Endeavor gives Victor an identical twin brother, Konrad, who serves as the catalyst for Victor’s quest for a potion that may (or may not) cure fatal illness and bestow near-eternal life.

Set in a darkly Gothic chateau outside Geneva at the end of the 18th century, the story opens when Victor, Konrad, and Elizabeth discover a secret passageway that leads deep beneath the chateau to a derelict laboratory in a library filled with old books of alchemy, including Agrippa’s Occulta Philosophia. The teens’ father finds them in what he calls the Biblioteka Obscura (Dark Library) and demands they promise not to return.

Soon Konrad falls dangerously ill with an ailment that doctors of the time cannot cure. Victor is determined to do whatever it takes to save his beloved twin. He returns to the Dark Library with Elizabeth and Henry and stumbles on Agrippa’s claim to have developed a formula that promises to remedy human suffering and prolong life. The trio finds their way to Polidori, a discredited alchemist living in Geneva who agrees to translate the formula for the Elixir of Life, written by Agrippa in an ancient script called the Alphabet of the Magi.

Polidori translates the formula that calls for three ingredients that Victor, Elizabeth, and Henry must procure to make the Elixir. The first is a rare lichen that grows at the top of the tallest trees in the Sturmwald, the forest outside Geneva. The glowing lichen must be harvested at the dark of the moon. Victor makes a potion recommended by Polidori that bestows the “vision of the wolf” to those who ingest it to help him see during the midnight mission.

The second ingredient is oil from the head of the coelacanth, a fish presumed extinct, but which actually lives deep inside a series of caves bordering Lake Geneva. Victor returns to the forbidden library once more and finds a formula for “flameless fire” in another book of alchemy. He prepares the concoction to help guide the seekers through the wet darkness of the labyrinth-like caves where their torches might fail.

After Victor, Elizabeth, and Henry survive harrowing adventures to gather the lichen and oil, a young doctor armed with new medical techniques arrives at Chateau Frankenstein. He administers a dangerous treatment to Konrad who immediately improves. The plan to make the Elixir is temporarily forgotten.

A love triangle between Elizabeth and the twin brothers becomes apparent. Elizabeth and Konrad declare their devotion to each other, not knowing that Victor harbors deep feelings for her as well. But Elizabeth’s real feelings are not as clear as she believes them to be. She’s a chronic sleepwalker and turns up in Victor’s bed one night, curling close beside him. Torn between desire and doing what is right, Victor takes her back to her own bed. But it is his name, not Konrad’s, that she murmurs in her sleep as Victor leaves the room.

When Konrad suddenly falls violently ill again, Victor, Elizabeth, and Henry return to Polidori. He has now finished translating Agrippa’s work and reveals the third element needed to complete the Elixir of Life. The ingredient is readily available but requires a sacrifice from Victor that is both personal and painful. A stunning betrayal follows that severely tests Victor’s resolve and loyalty.

As most of the characters in this story are male, it may well appeal to that rarest of reader, the teen boy. Victor is passionate and often torn by contradictory emotions. Konrad is steadfast in all that he does and believes. And Elizabeth is a strong young woman who proves herself as brave as anyone during the group’s perilous adventures. Much like Mary Shelley, she too is a woman ahead of her time.

With the final pages, the author deftly sets the scene for the second book in the planned trilogy. In Shelley’s book, first published anonymously in London in 1818, Victor attends a German university where he excels in chemistry and science. He learns of galvanism, the method of using electricity to reanimate the dead. Even though the astute reader can guess what will happen in Mr. Oppel’s second book, reading more about the origins of the enduring story of Frankenstein and his monster is something to look forward to. Mr. Oppel writes a book that is both fascinating and unique as he creates Victor Frankenstein’s early life in a way never before told.