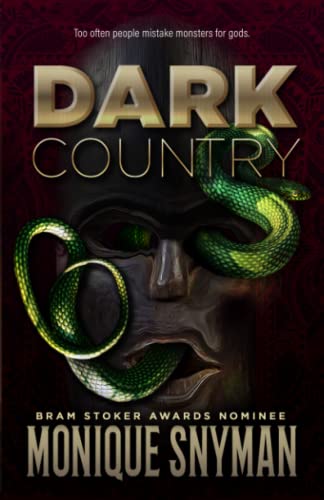 “Anyone liking a tense mystery with elements of the supernatural, a villain who believes himself about to become a god, and a heroine who swears she’ll prevent it while at the same time acknowledging her own weaknesses, will read Dark Country and demand more.”

Esme Snyder is a member of SIRCIS—Snyder International Religious Crime Investigative Services—a South African organization founded by her grandfather to study the fringe sciences, but also assisting in investigating crimes involving the occult.

“SIRCIS has no affiliation with the South African Police Service Occult Related Crimes Unit, established in 1992. SIRCIS is a private organization dedicated to finding answers rather than creating a second wave of Satanic Panic in the general populace.”

Currently, a serial killer is on the loose in the country’s capitol, Pretoria. Two of the victims died, one, an albino—his entire body considered very important magic—survived.

“Sangomas—diviners, healers, and such—are legally recognized in South Africa as health practitioners under the Traditional Health Practitioners Act of 2007. Real certified sangomas aren’t the problem. The problem occurs when charlatans don’t adhere to ethics and laws and then screw around with forces they can’t control.”

That’s when muti-crimes happen, the killing of someone for specific body parts to be sold on the black market for use in magic.

The killer leaves clues and the police are adept at solving those but never manage to arrive in time to prevent the next death.

When the latest victim is taken into custody for his own protection, he dies before Esme’s eyes, killed by a force that no one in the police station can see or stop.

“I watch the slashes appear across his face, over his bare arms, on his ankles, maiming him. His flesh peels away wherever the cuts run too deep. The screaming comes to an abrupt end. The quiet is far worse. Rochester—now a bloody mess—falls to his knees.”

Someone very powerful is at work, and it looks as if he isn’t going to stop. What they don’t know is that he now considers Esme a worthy adversary and is making her his opponent in this cat-and-mouse crime spree. But there’s one catch: If Esme doesn’t cooperate as he likes, she’ll become his next victim.

“She’s the one who exudes the greatness he’s been waiting for. She’s worthy to play his game, even though she doesn’t know it. He has big plans for her. Wonderful plans.”

“Too often people mistake monsters for gods.” That is the opening line of Dark Country that perfectly sets the stage.

Africa has always been considered the “Dark Continent,” full of mystery and adventure. This novel about the darkest of crimes couldn’t have come from a better location—and that is meant with the best of intentions and a great compliment. It’s also refreshing to have a novel come from a country most of us know very little about, outside of Tarzan movies, giving us a look at the city of Pretoria and its countryside as well as the way a police investigation is carried on in that city.

Esme is a wonderful character, brave in spite of her fears, forcing herself to investigate a crime while at the same time admitting her own helplessness in certain situations, whether it’s stalking a serial killer, or facing a “shapeless thing darker than night” that hovers over her in the supposed safety of her own bedroom.

She’s not reckless, but often appears so because of her desire to not seem the helpless female. This is no better shown than in an episode in which her partner, unnerved when an informant gives a mystical revelation, abandons her in a rough part of town. Since he’s also her lover, this act is unforgivable on many levels. Esme, however, rises to the occasion. She calls the newest member of the team to come to her aid, and in a frightening encounter following, the two unintentionally begin an intimate bonding.

Anyone liking a tense mystery with elements of the supernatural, a villain who believes himself about to become a god, and a heroine who swears she’ll prevent it while at the same time acknowledging her own weaknesses, will read Dark Country and demand more. Thankfully, the sequel, False Prophet, is already on the way.