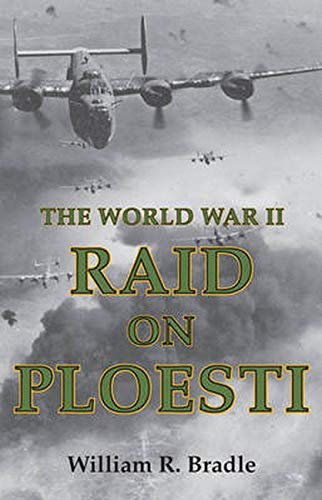 “an eminently readable story that further emphasizes and demonstrates the mettle of the Greatest Generation.”

One can usually find a plethora of publications when it comes to famous or prominent events in history, and that is true in the case of the U.S Army Air Force’s mission to bomb the oilfields and related infrastructure in Ploesti, Romania. Of course, these range from the personal accounts and memoirs of participants to latter day historians.

With these multiple accounts, is it really necessary for another? The answer should be yes as, given the multiple perspectives of the participants and the fact that one is generally only aware of what goes on in one’s immediate vicinity, there can be a lot of missing information in recounting something that was as potentially game-changing as this mission, yet was fraught with errors, personality conflicts and differences, danger and death.

With Hitler’s war machine—and every other German industrial capability—in dire need of oil with which to operate, it was only natural that a target such as Ploesti would end up in the crosshairs of the Allied strategic bombing campaign at some point. Without oil and gasoline, planes cannot fly and tanks and other vehicles become stationary. Depriving the Germans of this vital resource would dramatically shorten the war.

Unfortunately, distance to the target and its attendant fuel requirements, the need for secrecy, an insufficiency of available aircraft for the mission, the sticky issue of possibly violating Turkey’s neutrality, and a lack of cooperation from Soviet Russia in allowing aircraft to land there post-bomb run were rendered even more complicated by the strength of the German and Romanian defenses near and over the target.

Taking this into account, planners decided that flying at nearly wave top and ground level (except for climbing over mountains en route) would preclude enemy radar detection, preserving the element of surprise but didn’t in the end, prevent heavy anti-aircraft fire at the target and intimidate enemy fighters from trying their luck at opposing the unescorted bombers.

In spite of the planners’ belief that 2000 bombers would be necessary get the job done properly, less than 200 were available to fly from bases in Libya, and some of those were forced to abort after takeoff due to maintenance and mechanical issues. Even undergoing extensive pre-mission flight training, a familiarization film, and small scale mockups of the target still did not eliminate all of the problems inherent in such an undertaking.

Compounding this, and one of the major errors committed, was the fact that one wave mistakenly turned too soon on their way to the target and, consequently, jeopardized completion of that part of the mission. The respective bomb groups were actually tasked with destroying multiple facilities within the Ploesti complex, including cracking plants, pumping stations, and other infrastructure.

Not surprisingly, such a complex mission was also overtaken by a lack of viable and immediately accessible intelligence on enemy defenses. For example, there was a mobile armored train available which contained many light and heavy anti-aircraft weapons and was responsible for the loss of many bombers, inasmuch as railroad tracks were a navigational landmark.

Many of the bomber and crew losses, as described, were heartbreaking and tragic, even as, on the plus side, there were just as many acts of heroism, selflessness, and sacrifice with virtually all participants receiving decorations, including five Medals of Honor.

The return trip was no piece of cake either as many of the surviving aircraft had suffered major damage from enemy ground fire and fighters. It was a race against time, even without damage as fuel concerns became paramount. Some were able to return to base in Benghazi, Libya, while others were forced to land in British-held Cyprus, Sicily, airfields in Turkey where crews were interned, and even Amman, Jordan. Others ditched, sometimes unsuccessfully, in the Mediterranean.

This account of the Ploesti mission may not be the necessarily definitive one, yet it does an admirable job of laying out the planning, personalities, and attendant conflicts among many participants, the mistakes made and losses inflicted by the Germans and Romanians.

Although well-researched with some previously unseen photographs, what is missing, perhaps, is an appendix specifying statistics of losses in men and machines in order to better comprehend the magnitude of effort and sacrifice made by the 178 crews. The map of the flight path to the target is also rather lacking in size and resolution.

Otherwise, this is an eminently readable story that further emphasizes and demonstrates the mettle of the Greatest Generation.