Daring Dozen: The Twelve Who Walked on the Moon 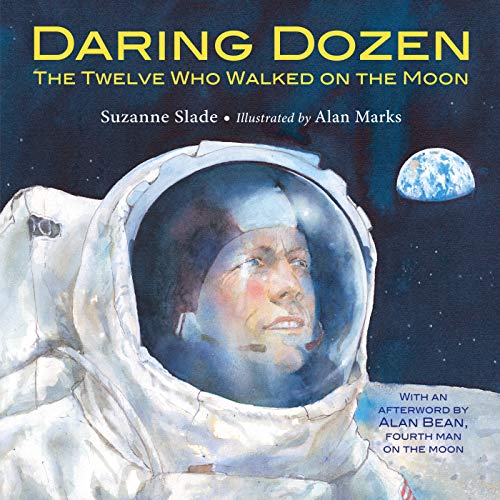 “Daring Dozen is a beautiful tribute to exploration and discovery, commemorating the 50th anniversary of Apollo 11’s historic lunar landing . . .”

Readers young and old will be over the moon giddy from the first page to the last as they become fellow explorers—diving into this delightful book about the Daring Dozen: The Twelve Who Walked on the Moon. Suzanne Slade offers us a carefully researched, yet intimate view into the seven Apollo missions from 1969–1972 as we are introduced to the astronauts and what they learned about the moon, each mission building upon the previous ones. Alan Marks’ skilled watercolor ink illustrations provide a soft, nostalgic feeling that adds to the very personal and warm approach in this story.

The Apollo missions are presented in chronological order, and with each page the reader becomes part of landscape and has a close-up view of the different terrains these missions explored: dusty lands, mighty mountains, highlands, and craters.

And as these missions were working journeys, one learns that the astronauts were kept very busy collecting soil samples, gathering rocks, taking pictures, conducting experiments, and planting the American flag—that proud moment that has become so iconic in our country’s collective memory of that time in space travel.

With spare text and inviting art spreads, Daring Dozen captures the excitement, thrill, joy, and danger of these pioneering space adventures. It also offers a glimpse into some fun like when Apollo 14’s Alan Shepard became the first golfer in space. Though over the course of these missions a number of treasures were collected, this story also reminds us of how everything is connected and the importance of giving back, as when Apollo 16’s Charlie Duke offers the moon a very personal treasure: a photo of his family.

In the back section there is an important acknowledgment of the amount of people and work that went into making these expeditions possible. These individuals created the various vehicles (from Saturn V to Lunar Modules) that allowed humans to explore space, and they are featured and described at end of the book alongside additional interesting notes about each mission. There is also a poignant remembrance from Apollo 12’s Alan Bean as he talked about learning to walk on the moon, and his reflections about seeing the Earth from the moon’s surface help the reader feel simply awestruck.

Daring Dozen is a beautiful tribute to exploration and discovery, commemorating the 50th anniversary of Apollo 11’s historic lunar landing—and forever inspiring girls (perhaps women astronauts will be featured in a follow-up book) and boys to look into the unknown and leave their footprints as they check out uncharted lands.