Dare to Love Again: A Novel (The Heart of San Francisco) 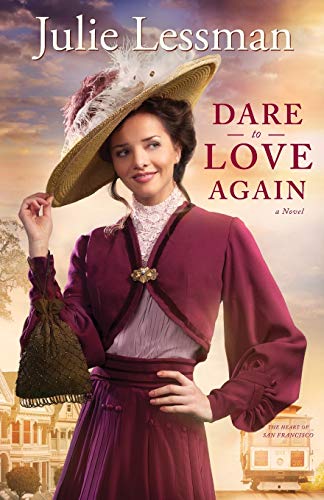 Julie Lessman is an award-winning author of The Daughters of Boston and Winds of Change series. The recipient of 14 Romance Writers of America awards, Lessman was chosen as the Romance Fiction Author of the Year in the Family Fiction magazine and the Readers’ Choice awards.

Dare to Love Again is not only a delightful tale, but it takes place in a very provocative and intriguing time and venue—San Francisco’s notorious Barbary Coast during the Gilded Age. The Gold Rush and the Industrial Revolution, combined with the discovery of silver in the Comstock Lode, combined to make San Francisco a boomtown that still exists today. For those unfamiliar, the Barbary Coast became legendary due to the poverty and desperation of the lower classes that called it home. Despite the upscale lifestyle of the wealthy during the Victorian era, the Barbary Coast was rife with vice and violence. To venture into the area was considered unwise and foolhardy.

Nevertheless, the book’s protagonist, a wealthy and privileged Allison McClare, is determined to prove that she is mature, prudent, and quite independent, thank you. A teacher at an all-girls school on the fringe of the Barbary Coast, she unexpectedly encounters a couple of the inebriated locals who quickly attempt to take advantage of her naiveté. Surprisingly, Ms. McClare is able to defend herself with an oversized hatpin.

Afterward, she meets Detective Nick Barone who becomes frustrated with the woman’s lack of judgment. The two butt heads at almost every meeting, and much to Barone’s chagrin he is assigned as Ms. McClare’s bodyguard.

The author does a fine job of fleshing out both characters as well as creating a supporting cast of family members and city officials. Between glimpses of San Francisco’s wealthy class and its ignored lower class, readers are entertained by the exploits of the day-to-day activities at The Hand of Hope School.

The budding romance between McClare and Barone is fun to watch, and the surprising twist at the end of the book makes for a satisfying conclusion to a well-written story.