Dare to Know: A Novel 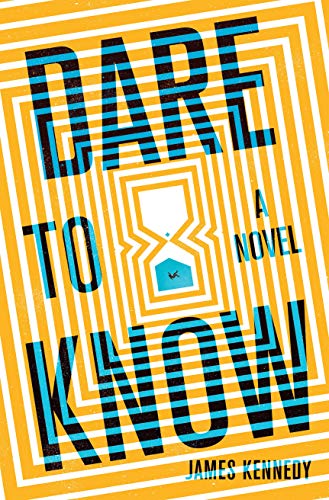 “The time of someone’s death doesn’t exist until Sapere Aude calculates it, forcing the waveform to collapse. ‘You do the math, and it makes the math come true.’”

This genre-bending thriller begins with what novelist Anthony Burgess called “an arresting opening.” The first 106 pages take place in the agitated mind of an unnamed narrator we’ll call “X.” It’s a race against time story that opens on what has been a woefully bad day. He sells predictive death—totally accurate but expensive—to people who really don’t want it.

But “selling the time of your death is the only real job I’ve ever had.” He’s good at it. “Back then” the company could afford to turn business away; people thought nothing of paying $20,000 to know the exact time of their demise. He knew how to perform the calculations by heart, “developed an eye for it. Could sense how someone would react.” At first, disclosing “the moment” was a sense of occasion. He could see the client’s face change before his eyes. Now, “it’s like I’m giving them a quote for drywall . . . no longer a classy business.”

The death prediction industry is built on the existence of thanatons, subatomic “death particles” similar to those in quantum mechanics, except they are quantum-entangled in human demise. Thanatons do not cause a death; they “just react to it.”

Now bankrupt, divorced, and estranged from his sons, X is desperate for the commission a completed sale would earn him. He’s picked a coffee shop to deliver the news. But it doesn’t go well. He senses it going off the rails, the whole meeting collapses, and he races out into the snow.

An accident then runs him off the road. While waiting for the interminable tow truck, he calculates his own death day—a practice very much forbidden—only to discover that he died minutes ago even though he seems very much alive. The first scene is a terrific opener. The rest of the story doesn’t always match its tone, but good pacing and clever plotting keep the pages turning.

The death company, which X actually helped found, is called Sapere Aude, or “Dare to Know.” The phrase alludes to the Latin poet Horace (20 BCE) and the 18th century Enlightenment (He who has begun is half done; dare to know; begin!). It is the moral about a fool who waits for a stream to stop flowing before attempting to cross it.

The time of someone’s death doesn’t exist until Sapere Aude actually calculates it. Running the algorithm forces the waveform to collapse, pinning that person’s death down to a particular time among many possibilities. “You do the math and it makes the math come true.”

Some people attempt to beat the prediction by trying to kill themselves. But no one can add to or subtract even a second from the life that Sapere Aude predicts. Those who attempt suicide are marked by the thrill of having felt “the invisible guardrails,” and once felt they are “excruciatingly aware of them for the rest of their life.”

Two figures from the past help X resolve his conundrum of being simultaneously dead yet alive: Renard, a child genius he befriended at an eighth-grade summer physics camp for gifted students (a retreat for “parents looking for a place to dump their clever but not outdoorsy offspring for July and August”), and Julia, a childhood sweetheart who climbed the corporate ladder with him at the predictive death business.

X travels across the country to find Julia, the only person who can confirm the accuracy of his personal forecasting. She still possesses the two blue envelopes that contain the death predictions they’d calculated for each other years back when they were romantically involved.

As X races to find her, he discovers an unsettling truth about prediction. By somehow slipping out of his allotted time to die, he has slipped outside of the thanaton system itself. It leads him to the thanaton of thanaton particles, the eschaton or end of the world particle. The solver performing the calculations becomes part of the problem, revealing that the eschaton isn’t a particle at all: it is a person.

The eschaton speaks not to a single death, but to planet-wide carnage. The universe cannot exist without thanatons, so something must be replenishing them. That something is “a great calculation” accompanied by “a giant amount of human death.” Such conditions historically happened a thousand years ago in 1054 and is about to happen again in the narrator’s world.

Dimidium facti, qui coepit, habet; sapere aude, incipe speaks to intellectual self–liberation by means of reason, a quality that may be lacking among this novel’s characters. Let the reader be the judge.