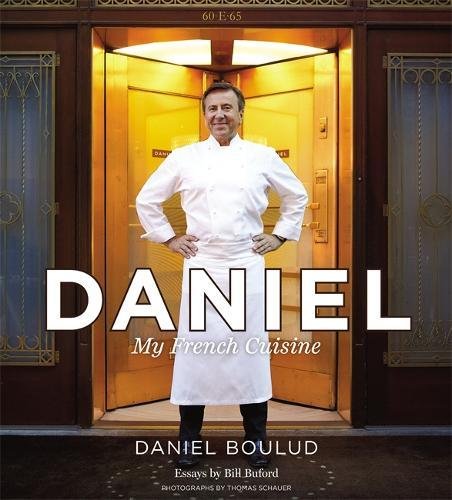 “This is why (if you can afford it) we are willing to pay so much to eat in a restaurant like Daniel rather than attempt to cook his dishes at home. . . . a trophy worth displaying.”

It is a truth universally acknowledged that a renowned chef at the head of a high-end destination restaurant (often eponymous) must be in want of a cookbook that will immortalize his career.

It would be a mistake to assume, though, that Daniel is just another trophy cookbook to gather dust on your coffee table. True, its heft (the book weighs in at 5 pounds 12 ounces) announces that this is a Serious Cookbook Showcasing Chef Boulud’s Considerable Talent.

And as you would expect, it is filled with recipes most of us would never even attempt—it is a mystery why chefs, with an entire kitchen brigade to help them, think we mere mortals can execute their creations without ending up in a puddle of goo on the floor.

This is the kind of book that could seriously undermine the kitchen confidence of even the most experienced among us. That said, Chef Boulud has charmingly proffered an email address should you need any help with his recipes.

Of course it is a beautifully designed book in the coffee table genre with crisp, pristine photographs of food accompanied by recipes with multistep directions and lengthy lists of ingredients. Take the recipe as seemingly simple as White Truffle Scrambled Eggs: it is broken down into three separate parts and has a total of twelve ingredients.

This is why (if you can afford it) we are willing to pay so much to eat in a restaurant like Daniel rather than attempt to cook his dishes at home.

But there is more to Daniel than its formulaic art book presentation. Sandwiched between Part I: Recipes from Restaurant Daniel and Part III: Daniel at Home (you don’t really think this is where you will find recipes you can cook, do you?) is Part II: Iconic Sessions, a series of witty essays written by Bill Buford, an author and staff writer for the New Yorker who studied cooking at L’Institut de Paul Bocuse in Lyon, France.

These essays are pure gold and lighten the mood of Daniel considerably. In fact, they make the book. Here Daniel Boulud, through Mr. Buford, demonstrates some iconic haute cuisine dishes, a kind of homage to his early years as an apprentice chef to the equally iconic Paul Bocuse in Lyon (considered the gastronomic capital of France).

While written in the first person, the essays manage to both elevate and humanize Chef Boulud so that he comes across as a formidably talented chef who also wouldn’t mind sitting down with you over an omelet and a glass of wine.

The dishes Daniel Boulud along with his staff and Bill Buford prepare in Iconic Sessions are so over the top they look like caricatures of French food: Turbot Soufflé, Jambon au Foin (that would be ham cooked in a nest of hay), Tête de Veau en Tortue (you should see the photo of the whole head of veal that is wrapped in cloth and plunged in a huge copper stock pot), Coulibiac, Canard à La Presse and more.

As Mr. Buford writes in his introductory essay:

“It is accepted that French food is normally challenging to prepare, that it can be inflexible in its orthodoxies, obsessive in its attention to detail. But nothing about these dishes was normal. They were extreme . . . Our itinerary was Daniel Bulould’s doing. Daniel, who is on a first-name basis with the entire world, was also our Daniel, our boss, our patron, our team captain, our instructor, and the only person any of us knew who actually knew how to make everything. For him, these dishes loomed gigantic. They were bigger than what they seemed to be, and what they seemed to be was already very big. They were food, and craft, and art, and metaphor. They were ‘iconic,’ he said.”

No wonder Unesco has enshrined French gastronomy as part of humanity’s cultural heritage.

And thank goodness Daniel Buloud is around to keep the French gastronomic art form alive. Daniel may be a trophy cookbook, but with the essays by Bill Buford included, it’s a trophy worth displaying.