The Dangers of an Ordinary Night: A Novel 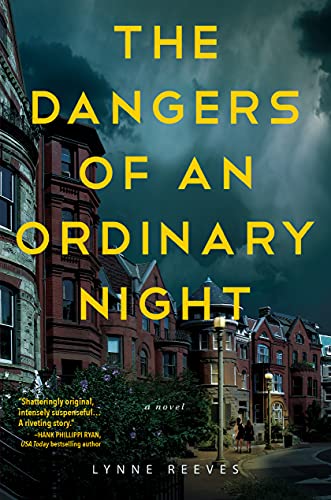 “As the suspects add up, the suspense and mystery escalate until the unexpected and shocking conclusion, making this a true nail-biter.”

Natalie “Tali” Carrington and June Danforth, best friends forever, attend the Performing Arts High School in Boston. They, and their classmate, Sam Wallace, are forging their way to a career in acting. Sam and Tali, the lead actors in their upcoming play Spring Awakening, are at rehearsal late one night along with June and the rest of the cast. When June and Tali do not return home, panic ensues.

Tali’s mom, Nell, who works at the school, loves her job, and she can keep track of her teenage daughter and get reduced tuition. Life seems great, but Nell and her husband, Zeke, are at a crossroads. Allegedly a reformed alcoholic and gambler, Zeke has fallen off the wagon and used most of the family money to pay his debts. His behavior has been escalating for quite a while, causing tension in the household, though Nell downplays it not to worry Tali.

Meanwhile, June’s dad, Peter, is raising his daughter after the death of his wife several years ago, and with his daughter now missing, the anxiety he is dealing with is unbearable.

Detective Fitz Jameson is on the case, searching for the girls. All the classmates are questioned, especially Sam, who is acting a bit cagey, but everyone believes it is due to his overbearing stage mother, Ana, who wants complete control over her son.

Two days after the two girls have gone missing, they are discovered on the beach at Situate, a small town south of Boston. Tali is in a stupor, and June is confirmed dead at the scene. June’s body is sent to the coroner’s office, while a bewildered Tali is transported to the hospital with reported bruises and in shock. What occurred with these girls? Who abducted them and dumped them on this distant beach on a cold and rainy winter’s night?

“Notes made by the ME below the pictures say, ‘Superficial abrasions, arm, and legs, most notable on palms of victim’s hands. No major trauma to the head, neck, or chest. No evidence of sexual assault.’. . .

Psychiatrist Dr. Cyn Rawlins meets with Tali to ease her through this trauma and sort out what happened. Were they drugged? Were they raped? Tali more or less remains mute only to say she cannot remember anything, and she refuses to be examined for sexual abuse, insisting it did not happen.

Tali states that she only remembers being shoved into a car by a man wearing a fur jacket like her father owns. This information leads Detective Fitz to home in on Zeke as the offender, but why would he abduct his child and her friend? Learning about his gambling debts, Fitz considers someone maybe did this as a ploy to get him to pay up.

Meanwhile, Nell wants no more to do with Zeke. When he is arrested and incarcerated, she focuses on her daughter, afraid to let her out of her sight. Dr. Rawlins proves to be a lifesaver for Nell as she continues seeing Tali to help her overcome the traumatic event and ascertain more information from her if possible.

Fitz becomes obsessed with this case as it is similar to a long-ago crime where his young friend, Maddie Townsend, faced a like situation. Could the culprit from then be back?

“Fitz isn’t searching for random things to compare the two cases; they keep surfacing. He doesn’t confuse the Carrington’s South End with his and Maddie’s South Boston, but there’s no denying that Tali’s bow-front row house looks nearly identical to Maddie’s parents’ brick place. At least it did the last time he drove by it.

“When she died, Maddie was the same age Tali Carrington is now.”

To assuage his guilt and do right by the Carringtons and Danforths, Fitz pulls no stops to finding closure. But by this time, several more suspects turn up. Can the arrogant acting coach, Greg Normand, be involved due to his strict and overbearing ways that make the students loath him? Could Sam have something to do with this, or even his officious mother, who only wants him to be in the spotlight?

In addition to the present scenario, Detective Fitz’s backstory is presented, which gives the story more perspective. As the suspects add up, the suspense and mystery escalate until the unexpected and shocking conclusion, making this a true nail-biter.