On Dangerous Ground: America's Century in the South China Sea 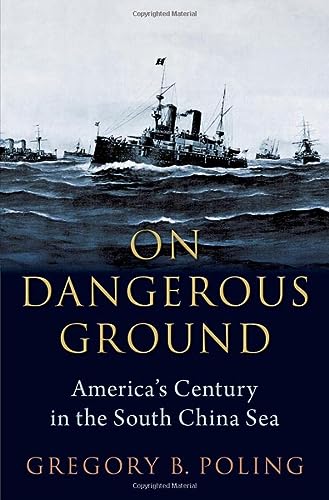 This is a fundamental book for understanding one of the most salient issues roiling relations between China, its neighbors to the south and east, and the United States. Author Gregory Poling is director of  maritime transparency studies at the Center for Strategic and International Studies in Washington, DC. Poling puts the problem in historical context.

America’s interest in the South China Sea goes back to the 19th century. Concerned for its ability to buy and sell goods around the world—from the “shores of Tripoli” to Edo to Guangdong—the United States has asserted its right to enjoy freedom of the seas. A latecomer to imperial expansion, the US gradually built naval forces that permitted it to compete with British and other European powers. During the long Cold War, even the Soviet navy was far inferior to the US. Now its naval superiority is challenged by a China that leads in quantity though not in quality of ships at sea.

Beijing showed little interest in the South China Sea until after World War II. Now it claims virtually the entire body of water and its resources. During the past decade China has erected military facilities on several islands, including several rocks built into man-made islands by dredging up adjoining sand and coral. China’s fishing fleets ravage the coasts of the Philippines, Vietnam, and Indonesia (not to mention Ecuador and Africa). Its navy and coast guard challenge US and European ships when they sail close to the islands claimed by China.

Freedom of the seas is an enduring interest of all nations and is vital to global peace and prosperity. The international community benefits from the rules-based maritime order, where international law, as reflected in the 1982 UN Law of the Sea Convention (UNCLOS), which sets out the legal framework for all activities in the oceans and seas. This body of international law, ratified by 164 UN member-states, sets out the rules for national, regional, and global action and cooperation in the maritime sector and is vital to ensuring the free flow of global commerce.

UNCLOS provided for an Arbitration Tribunal to rule on disputes. The Philippines asked the Tribunal to rule on China’s activities in the South China Sea. The People’s Republic of China asserted the court had no right to rule on matters affecting PRC sovereignty. But the court sided with the Philippines. In 2016 the Tribunal delivered a unanimous decision firmly rejecting China’s expansive South China Sea maritime claims as having no basis in international law. The Tribunal stated that the PRC has no lawful claim to the area determined by the Arbitral Tribunal to be part of the Philippines’ exclusive economic zone and continental shelf. The PRC and the Philippines, pursuant to their treaty obligations under the Law of the Sea Convention, are legally bound to comply with this decision.

Despite its legal victory, the new administration in Manila, that of Rodrigo Duterte, tried to align with Beijing and obtain development aid. It did nothing to pursue the court’s ruling. Vietnam and other members of the ASEAN (Association of Southeast Asian Nations) could benefit from the court ruling but, fearing Beijing’s wrath, also did little to act on it. Neither did the United States, except to insist on its right to enjoy freedom of the seas.

After a period of opting for caution and downplaying the victory that it won in the South China Sea arbitration, Manila gradually turned to confirm the value of the Award. Addressing the United Nations General Assembly in September 2020, President Duterte stated that “the Award is now part of international law, beyond compromise and beyond the reach of passing governments to dilute, diminish or abandon.”

US Secretary of State Anthony Blinken addressed these issues in 2021. He said that nowhere is the rules-based maritime order under greater threat than in the South China Sea. The People’s Republic of China (PRC) continues to coerce and intimidate Southeast Asian coastal states, threatening freedom of navigation in this critical global throughway.

The US has called on China to abide by its obligations under international law, cease its provocative behavior, and take steps to reassure the international community that it is committed to the rules-based maritime order that respects the rights of all countries, big and small.

Despite these brave words, the US Departments of State, Defense, and Commerce approach these issues with one arm tied behind their backs. The UN Convention on the Law of the Sea spells out the rights and duties of sea-faring and littoral nations. The Clinton administration helped negotiate this treaty, but a group of senators has blocked its ratification, fearing it would constrict US ability to mine the seabed.

Poling’s book provides a clear account of the evolution of this conflict, which overlaps with the defense of Taiwan and with Chinese Japanese claims in the East China Sea. Poling suggests approaches to compromise, but the steady advance of Xi Jinping’s authority within China and his hard line in foreign policy do not augur well for conciliation.

Poling’s book provides an interesting historical read and an essential text for understanding a key zone of international conflict.