The Dangerous Edge of Things 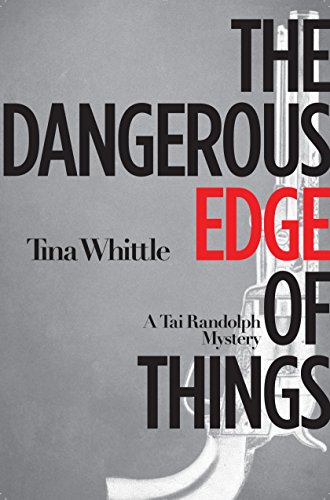 Tina Whittle’s crime fiction debut tells the story about Tai Randolph, former tour-guide to the dead and recent gun shop proprietor. Tai relocates to Atlanta after she and her brother, Eric, inherit their uncle’s confederate-flag-adorned gun shop. After dropping Eric off at the airport, Tai returns home and discovers the body of a young woman, Eliza Compton, in a car across the street.

Suddenly a murder suspect, right alongside Eric, Tai isn’t the only one questioning the timing of her brother’s Bahamian vacation.

Rifling through Eric’s files, Tai finds two business cards and tucks them away for later; one is for APD Detective Dan Garrity and the other is for Marisa Edenfield, partner at Phoenix Corporate Security Services where Eric consults.

After being questioned by the police, Eric worries about Tai’s safety and convinces her to stay at the Buckhead Ritz for a few days on Phoenix’s tab. Unbeknownst to Tai, Eric has also assigned Trey Seaver, former special ops, ex-APD detective, and current employee of Phoenix to protect her. Ever observant, Tai instantly notices the very attractive, yet incredibly focused Trey and elicits a confession from him regarding his assignment.

After promising to stay in her hotel room, Tai slips out and returns to her brother’s house to do a bit of snooping; however, she’s not alone—other Phoenix agents, including Trey, have beaten her to it.

In a move of self-defense, Tai holds Trey at swordpoint while she calls Detective Garrity for help. Lucky for Tai that Trey managed to stifle any of his own impulses for self-defense or things could’ve gotten messy. Detective Garrity fills Tai in on a serious accident Trey endured that left him with a permanent brain injury that doesn’t always allow for rationalization before taking often-deadly action.

Tasked with trying to clear not only her name, but her brother’s as well, Tai begins to look into Eliza Compton’s murder. Things get a little more complicated when one of the richest families in town hires Phoenix to work the case alongside the police. When the head of Phoenix puts Tai on the payroll in a keep-your-enemies-close kind of way; Tai begins to see a suspicious glow being cast from every direction—including Phoenix’s.

Tai will do whatever it takes to clear her name and get to the truth; and, as if things aren’t confusing enough, not only must Tai trust a trained killer, but she might also be falling in love with him.

As Tai gets deeper into the case, it becomes more difficult to determine who to trust—even her own brother isn’t immune from her suspicion. But for the reader, Eric’s absence is actually a blessing. Not as developed as the other characters, Eric seems only to detract and slow the momentum that is carried so well by Garrity and the investigative team of Tai and Trey.

It’s not clear why or how Tai has such a knack for sleuthing, but she does it believably well, with the help of Garrity who becomes her confidant, mentor, and guide to all things Trey. In addition, Tai has a few friends in shady places—mainly her (gay) best friend and go-to guy, Rico—who help out with intelligence gathering, research and any tech toys she might need.

From the Trump-like elite, to strippers, dirty politicians and sleazy paparazzi, Dangerous Edge of Things has no shortage of potential suspects. Tina Whittle does a great job of keeping the reader off balance by creating a whirlpool of trust and doubt that continuously spins, making it tougher to suss out the guilty party.

Tina Whittle is a welcome addition to the crime fiction genre, and The Dangerous Edge of Things is the beginning of a very promising, lighthearted mystery series.