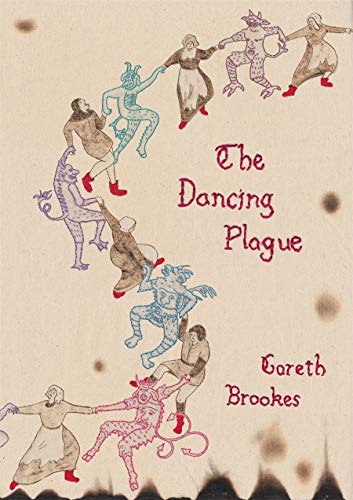 SelfMadeHero, a small British niche publisher of graphic narratives, has issued The Dancing Plague by Gareth Brookes, an award-winning illustrator and writer. Brookes has chosen for his subject an infection of uncontrolled dancing that gripped the medieval city of Strasbourg in the early 16th century. Citizens of the town danced unceasingly in the central marketplace over a period of a month until their feet bled and they dropped from exhaustion. Many died.

Though this event may seem an unlikely subject for a 21st century graphic narrative, it’s not difficult to see correspondences between Strasbourg’s affliction and the COVID-19 pandemic that has swept through our world.

In exposing the European medieval mind, prey to fears of devils and hell, obsessed with sin, and deeply invested in misogyny as the explanation for evil (blame the witch), The Dancing Plague can be read as a commentary on the irrationality, scapegoating, and sheer stupidity that has characterized our response to COVID-19, especially here in America, where 30 percent of the population refuses vaccination against the deadly virus, some on religious grounds (“God will heal us”).

Brookes centers his tale on Mary, a devout young wife and mother whose mystical encounter with Christ isolates her from the community and brings down on her charges of heresy and witchcraft. Her purity as the bride of Christ enables her to see the wickedness of others, others being the men of the town who regard all women as carriers of original sin that has blemished God’s perfect creation. (God, of course, also being a male figure.)

This misogynist doctrine is shown to be the rationale for a patriarchal social system under which women are the property of their husbands and fathers and an all-male clergy has seized control of the ideology that guides everyday life. Fast forward five hundred years to #MeToo.

Brookes structures the tale in alternating time jumps forward and back that trace Mary’s abusive relationships with men—her father, her husband, priests, town officials—and her deliverance into the arms of Christ. The story is framed by a brief scene with Lord von Hohenheim, a scholar who has written an account of the plague, blaming women and reaching the conclusion that “the understanding of men can only be corrupted by the words of women.” This prejudice is passed on to us as the wisdom of recorded history.

Brookes illustrates the story in simply drawn panels done in sepia tones, light and dark browns and blacks. The characters are distinguished by subtle differences in their clothing, not by their features, in a style reminiscent of Edvard Munch’s The Scream, another depiction of psychic terror. The supernatural figures, the devils and angels that contend for the souls of the townspeople, are more fully realized and livened with color. The devils are fantastically grotesque, with cloven hooves, horns, tails, wings, and horrible mutations.

Christ is shown as a heavenly figure, composed but concerned, raining his blood on the town and the landscape. Mary, the scapegoat who allows herself to be consumed in fire, joins him in heaven and sheds tears of blood.

The Dancing Plague transports the reader to a distant time with disturbing parallels to our own in a beautifully made book that is itself a work of art. It’s quite suitable as material for a family reading hour and discussion with young adolescents, who will be amused by the scatological language, captivated by the plot, and instructed by Brookes’ fanciful depiction of our irrational fears as devils performing the work of Satan through the agency of women.