Dancing in God's Earthquake: The Coming Transformation of Religion 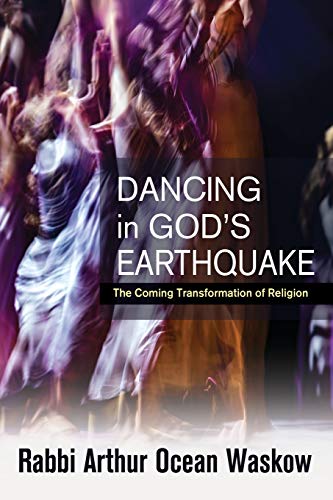 For more than 50 years, Rabbi Arthur Waskow has been a spiritual and intellectual force of nature. If the Jewish tradition included whirling dervishes, Waskow would be one of them.

All of this exuberant effervescence is on display in Waskow’s new book, Dancing in God’s Earthquake: The Coming Transformation of Religion.

“Every human community is quaking,” he writes. “Every aspect of our lives is shaking under foot . . . And some of us are trying to learn how do dance.”

A longtime Philadelphia resident, now in his mid-80s, and founder of the Shalom Center in that city, Waskow is the author of a dozen books. He writes in his latest that Martin Luther King, Jr.’s 1968 assassination changed everything for him.

“My own life was transformed by the week between the murder of Dr. Martin Luther King and the first night of Passover in 1968 . . . One week after Dr. King was murdered, the coming of Passover brought me ‘awoke.’”

The result was “Freedom Seder,” and later a hugely popular, companion Hagadah, which Waskow says he wrote as “an incitement for all peoples to win their freedom from all Pharoahs.”

Later that year, he was a delegate to the riotous Democratic National Convention. In 1969 he was called as witness at the trial of the Chicago 7, where a querulous Judge Julius Hoffman, an assimilated Jew, ordered Waskow to remove his yarmulke.

In the years that followed, he recalls, his political activism has become inseparable from his spirituality.

“Living an activist politics rooted in the Bible and the Spirit has brought me to a clarifying new theology, as well as a new politics.”

Soon Waskow returns to the book’s title. “How can we bring grace, music, joy into that dance?” It’s not an easy question to answer, he acknowledges, given the changing times. “It’s hard to dance when the dance floor itself is dancing, shaking, whirling, changing shape.”

Waskow says much of his new theology is framed and informed by ecology. He urges “Earth awareness,” finding the Divine in natural forces, like wind and rain.

While his primary focus is on Judaism, Waskow incorporates other faith traditions as well. He refers to “Rabbi Jesus,” reminding readers of Christianity’s common roots with Judaism.

“Diverse and connected,” he writes. “Judaism and Christianity are unique, and should listen far more closely to each other’s wisdoms.”

Instead of the word “God,” Waskow prefers variations on a new term for the Divine, “the great Name of the Interbreathing Spirit,” or simply, the “Breath of Life.” He suggests alternative forms of prayer: meditation, chanting, and dance, in particular improvisational, liturgical dance.

Waskow wants to learn from the past, but not restore it unaltered. He updates or gives a new, interpretive rendition of traditional Jewish prayers and festivals in order to address the Climate Change crisis.

So he addresses the biblical practice of the Sabbatical, seventh year, when the agricultural land was supposed to rest, fences between fields torn down so grazing animals can roam. Debts were cancelled.

As a small gesture, Waskow suggests that during this time modern consumers switch to grass fed beef and milk, to avoid corn feed lots—eating “eco-kosher” and “eco-halal”—and use electrical rather than carbon-powered vehicles.

In the 50th, Jubilee year, when in ancient Israel lands were returned to their original owners, he suggests that crushing foreign debts in the Third World be forgiven.

Refreshingly, Waskow takes pride in being schooled in changing gender roles, first by his 10-year-old daughter at the family’s Seder table and, 50 years later, by her daughter, Waskow’s oldest grandchild.

There seems to be a challenge to readers on almost every page of this book. Waskow calls his apparently utopian provocations “simply imaginings, intended to stretch our minds.” Self restraint, he writes, need not entail self denial.

So he argues, “What we thought were sins now seem life-giving possibilities.”

Waskow voices concern about the poisonous tone in the dialogue in the Jewish community about Israeli policy toward Arabs and Muslims in the Jewish State, and of Palestinians in the Occupied Territories, East Jerusalem and Gaza. Defense of repressive and unequal Likud policies has turned “idolatrous,” he says.

If the book has a shortcoming, it is when Waskow wanders into some abstract, abstruse theological weeds not accessible to B-students.

In a “Note to the Reader,” Waskow harks back to his signature “Freedom Seder,” calling the current COVID 19 pandemic “The Eleventh Plague.”

Looking to what happens after this plague has passed over, he writes: “When we do return to physical connection with our communities, God forbid that we simply rejoice in the passing of the crisis. And God forbid that we learn nothing, turning our eyes, our ears, our hearts, and our heads away.”

Until then, Waskow suggests that those fortunate to have enough personal and material resources (a minority, to be sure) view this time as “a restful, just, and joyful Shabbat—even perhaps several sabbatical months.”

And, in our haste return to “normal,” he urges us not to forget to reflect on the big question, and some answers:

“What did we learn? That all Earth and all Humanity are intertwined, a Grand Ecosystem connection by the Breath of Life and tinged with Divinity—and that efforts by any part to subjugate the rest will destroy us all.”