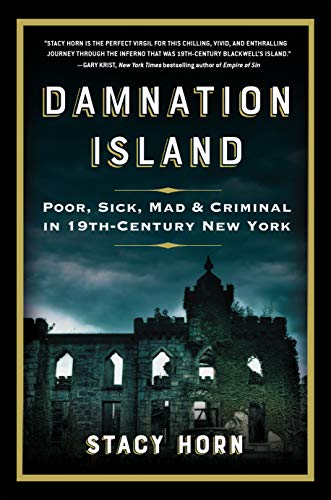 In her 1883 poem “The New Colossus,” Emma Lazarus gave the Statue of Liberty a voice and gave her a stance toward the world’s refugees that puts our own to shame: welcoming unreservedly the world’s poor and its persecuted to New York and to a new life in America.

But what about New York’s own tired and poor at that time? What about the wretched refuse of the City’s own teeming shores? The answer, Stacy Horn reveals in her lucid and compelling account of a largely-forgotten episode of New York City’s history, is that New York’s neediest were ferried off to an island up the East River and out of sight of Lady Liberty: Blackwell’s Island.

The Island, which the city bought in 1828 to alleviate the overcrowding at Bellevue Hospital, was conceived, Horn assures us, with the best of intentions; its almshouse and workhouse, its various hospitals, its lunatic asylum and penitentiary, were built to provide the poor social services of every stripe.

But Blackwell’s Island could hardly be considered a social safety net. It was, rather, a rat-trap in which inhuman parsimony, Tammany patronage, overcrowding and understaffing, the incompetence of authority, and stupidity mixed with casual sadism conspired to grind down and quite often kill the unfortunates sent there as patients or as inmates.

Its terror and cruelty did have a rationale: the hard-edged attitude held by its administrators that poverty was a moral failing, and that charity unwisely and overabundantly applied could only encourage idleness and perpetuate failure. The tightfisted charity of Blackwell Island, then, became indistinguishable from punishment—a fact suggested by the name of the agency in charge: the Department of Public Charities and Correction. It was “the cesspool of New York City,” according to William Glenney French, one of its most careful observers, its various institutions so many circles of an earthly hell.

Stacy Horn takes us, institution by institution, on a tour of that hell. She begins, with what by far is the most gripping and informative section of the book, at the northeast end with the Lunatic Asylum. There we witness the insane beaten down by the greater insanity of a toxic system in which the nurses and attendants are actual criminals—vagrants, thieves and prostitutes supplied as free labor by the nearby Workhouse. Restraint, both physical and psychological, was the rule.

Complaints were ignored by doctors—the patients were insane, after all—and avenged by staff. And all of it was accomplished with villainous frugality: each patient was fed, housed, and clothed with a pitiful 24 cents a day—little more than five dollars a day today. Insanity there was cultured, not cured.

This brilliantly-realized exposé of the Asylum, however, Horn never quite achieves in her exposés of the Island’s other institutions. Her tour of the island, it becomes clear, is a selective one, selective both by choice and by necessity. Horn focuses upon the later years of the island’s institutional history, framing her account with the experiences of careful observer William Glenney French, Episcopal Missionary on the Island from 1872 until 1895.

More than this, Horn, it seems, is hampered by the lack of evidence of the everyday cruelties in many of the institutions. Blackwell Island, after all, was an island, carefully closed off to sympathetic or reforming visitors—William Glenney French was a rarity. For her revelations, Horn depends upon exposure—exposure that came from public investigations, from rare observers such as French, from the few brave patients such as Sister Mary Stanislaus (of the Asylum) who sued for her freedom, and finally from the equally brave reporters who infiltrated the island. That’s what Nellie Bly did—famously—in 1887 with her Ten Days in a Mad-House. And it’s Bly who provides Horn with her most vivid and compelling evidence.

Life at the Asylum, then, was fully documented, and Horn’s account is correspondingly full. The other institutions were less exposed—some far less so. A few months after Bly’s stunt, her fellow reporter William Rogers tried to recreate her success by feigning drunkenness and getting himself sentenced to the Workhouse. His reporting, however, produced fewer sensational details and created far less of a stir; the public didn’t care about the fate of the petty criminals of the Workhouse.

Not surprisingly, Horn’s tour of the Workhouse is far less gripping. And the tour’s final stop—the Penitentiary—is the least captivating and enlightening of all. Few, apparently, who sentenced to the Penitentiary left detailed accounts of their confinement. One who did was the anarchist Johann Most; almost all of Horn’s few details about life there come from him. Besides this, her account is padded with the stories of one woman and two men who, for a short time, found themselves inmates there. What they saw, what they felt there: that we don’t know. The history of the Island’s Penitentiary, therefore, remains to be written.

In Damnation Island, therefore, Stacy Horn has given us the short tour of the Island. But what we learn is enthralling; it is well worth the trip.