The Damascus Road: A Novel of Saint Paul 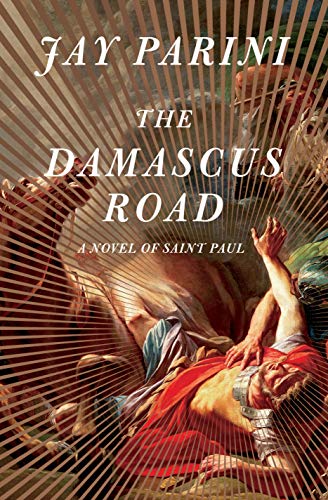 “The Damascus Road might be read as a parable of our own times with its mad men, visionaries, true believers, and pagans . . .”

Jack Kerouac, the master of the modern road novel, loved to mix his metaphors. “Walking on water wasn’t built in a day,” he would say and mean that miracles took time to germinate, evolve, and culminate.

Born into a New England working class Catholic family, and for a time a student of Zen Buddhism, Kerouac would enjoy Jay Parini’s new novel, The Damascus Road, because, as the title suggests, it’s a road novel with two main characters—Paul and Luke—who miraculously became saints.

Parinin’s novel begins after the crucifixion and the resurrection of Christ; Paul never sees Christ on the cross, but he does see him, or so he claims. The Damascus Road is a novel for Easter; publication came five days before Easter Sunday this year. So, read it and go to mass with new insights.

Jay Parini, who has previously written about Jews and Jesus, has been almost as prolific as Kerouac, and even more versatile than the author of On the Road, Dharma Bums, Mexico City Blues, Desolation Angels, Scripture of the Golden Eternity, and much more.

Like Kerouac, Parini writes poetry and fiction. He also writes criticism and biography. Gore Vidal, the author of Burr, Lincoln, Messiah and many other books, observed that Parini “has found his own uniquely potent way of remarking the historical novel.”

In the Author’s Note at the back of The Damascus Road, Parini writes, “I studied this infinitely complex figure, the man who more than anyone is responsible for inventing Christianity as we know it.” He adds. “My vision of Saint Paul is an attempt to dream the particulars of this world in ways that could well be true.”

At times, The Damascus Road feels like it might be a true account of the life of Paul, though it can also feel overly reverential and in need of more humor and less hagiography, though the pious might feel that Parini isn’t sufficiently reverential. Fortunately, the novel has two narrators. Luke and Paul take turns as storytellers in this historical fiction, which doubles as a buddy book.

The Damascus Road might have been called A Novel of Saint Paul and Saint Luke, but that would have given the two men equal billing, and Parini doesn’t view them as equals.

Paul is the rock star; Luke plays keyboards. In chapter one, Luke sounds like Paul’s publicist. “He was the great apostle of our Lord,” he says, though he adds that, “the old Paul . . . became so obsessed with his own righteousness that he lost track of his grand and beautiful vision of God.”

It feels right that Luke knocks Paul down a peg or two.

The Damascus Road takes readers back to a time before there was a Catholic Church, before Jesus was known as “Jesus Christ” and before Christianity was a religion. This may strike some as sacrilegious, though Parini’s aim is not to trash the sacred, but rather to further our understanding of holy men who go on pilgrimages.

In The Damascus Road, Paul talks about “Rabbi Jesus.” He is after all Jewish and a teller of parables, including the parable of the rich man who will find it harder to enter heaven than for a camel to pass through the eye of a needle.

“It was certainly one of the more arresting things that Jesus either said or was supposed to have said, and it retained a certain irony, given that so many of our leaders . . . myself, even Luke, had ample wealth,” Paul says.

At the start of this novel, Paul goes by the name of Saul. He persecutes the pre-Christian Christians and then becomes a follower of Christ, though Parini doesn’t linger over his conversion on the road from Jerusalem to Damascus in Syria. This isn’t a philosophical novel, though there’s plenty of introspection.

Unlike Sal Paradise and Dean Moriarity, the profane heroes of On the Road, Parini’s Paul and Luke move slowly on foot. They don’t do drugs, and they’re not desperately seeking sex. Paul is rather Puritanical and on a mission to save humanity from its own sinful self.

Parini conjures the world of imperial Rome when the followers of Christ were fed to lions and when the pagan world of ancient Greece was alive and well. Indeed, in one place Aphrodite, who was associated with pleasure and procreation, is “much venerated.”

Paul’s spiritual journey takes him into the world of prostitutes, and, while they try to seduce him, he’s not lured from the path of righteousness. A few detours in the manner of Homer’s Ulysses, would have enlivened this narrative, but Parini is more interested in the pleasures of the spirit than in the temptations of the flesh.

Parini also explores the nature of narrative itself. As Paul explains, “I need to find a narrative sufficient to the experience itself.” But that sounds more like the author than his character. Parini’s Paul is a bit of a post-modern who goes into the wilderness and to prison, too.

Paul emerges as a complex and contradictory figure. At times, he can sound like Ralph Waldo Emerson, the New England transcendentalist, as when he says, “What is the universe but God’s quotation of himself.”

Paul can also be irksome and irritating; perhaps he’s meant to be. He’s a true believer and true believers have a tendency to get on one’s nerves, even when one is a fellow true believer.

In the gruesome end to this narrative, Paul’s head is severed from his body. Luke gathers it in his hands, which turn “crimson and sticky,” and he begins “to shake all over.” He also hears Paul’s voice saying, “we are always together.”

Does he really hear Paul, or is he hallucinating? Parini leaves it to the reader to decide.

The Damascus Road might be read as a parable of our own times with its mad men, visionaries, true believers, and pagans, but unlike Saint Paul, Parini wisely steers clear of moral lessons and sermonizing. Amen and hallelujah!

Jonah Raskin is the author of biographies of Jack London, Allen Ginsburg, and Abbie Hoffman. His most recent title is the noir murder mystery, Dark Day, Dark Night, which is set in the present day in California’s wine and weed country. His writing appears in a variety of venues and covers topics as varied as food, farming, and the wilderness. He is also Professor Emeritus at Sonoma State University.