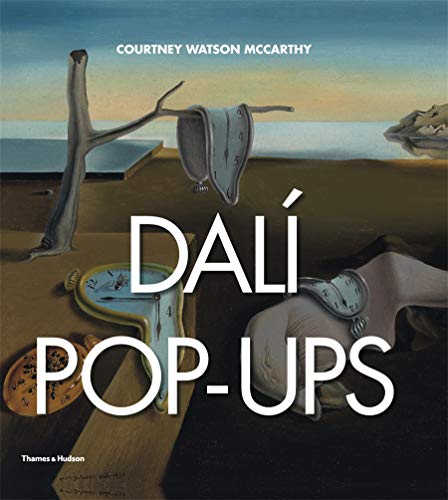 “This wonderfully designed work is a tribute to the creative mind of artist Salvador Dalí.”

The marriage of a pop-up book with the world’s most renowned surrealistic painter is match made in heaven. In Dalí Pop-Ups graphic artist and paper engineer Courtney Watson McCarthy literally and figuratively brings an added dimension to both painting and publishing.

Recreating the various masterpieces in the third dimension opens them up to even more reinterpretation than the original paintings already hold. The dripping, misshapen watches of Dalí’s masterpiece “The Persistence of Memory” once touched off fevered discussions about what time and dreams could possibly mean. In today’s world that revolution of image have morphed into a cultural touchstone referenced in The Simpsons and recognized by almost everyone.

Seeing the melting pocket watches jump off the page and hang in space right in front of us not only magnifies the idea of time being fluid and ever changing, it ignites a new appreciation for the work.

The great cliffs that anchor the image on the right corner of the same painting become even more remote when seen in the distance across the panorama of the landscape. The shadows that hang across the bottom two-thirds of the picture assume a definite menace as you begin to realize that something or someone is actually creating that shadow.

There are seven pop-ups as well as 14 other full color illustrations included in this collection. While the portrayal of such complicated images such as “The Persistence of Memory” and “Metamorphosis of Narcissus” may gather the most attention, the real beauty in the Ms. Watson McCarthy’s work is found in Dalí’s simplest images.

Laid against black background as it was in Dalí’s original, “Dancer in a Skull” looks to be a single, bare skull with a shock of red between the eyes. Closer examination reveals the face of a woman with a red flower in her hair. Open the page in this title and the skull now slides out at the reader. As it does the woman’s arms suddenly seem to hug the crevices that once held eyes and the jawbone become even more primitive, even animalistic.

Nowhere does Ms. Watson McCarthy bring the two formats together better than in Dalí’s late period oil “Rose Meditative.” She has chosen to hide the rose from the viewer. Only by using a pull tab at the bottom (a tradition in the best of pop-up books) does the rose reveal itself before the reader.

As it does we become a participant in the entire operation, joining the painter and designer in the process of creation. Even sound become part of the equation as the rose literally snaps into view when you pull the tag. As if a deity behind it all has snapped their fingers in the process of making the rose appear.

With her background in theater and scenic design, Ms. Watson McCarthy has laid out each image in such a way that it can be viewed at multiple angles. You see in each one of these recreations how she envisioned the painting as it might be viewed from the eighth row center as well as the balcony seat on the far right.

This is most prominently featured in “Galatea of the Spheres.” The moons, planets, racing neurons or circles that make up Dalí’s painting come to life in layers as they move off the page to new levels of beauty. The images shift up and down and even seem to move left and right as you shift your perspective.

Long thought of by many as something for children, modern pop-up titles such as this have come to hold some of the most imaginative and beautiful work created for the publishing medium. Ms. Watson McCarthy’s work is among the most enjoyable found in this centuries-old tradition.

The earliest versions of a pop-up book were geared toward teaching and often served as an instructional in multiple fields. The first known book with movable parts appeared almost 800 years ago when an early author added spinning wheels to a page in order to help teach what he believed.

Around the beginning of the 19th century pop-ups began to be seen as a great way to entertain children.

Even though titles were still made that featured art and wonderfully creative images and were meant to appeal to adults, as time moved on public perception began to see the books as the provenance of children’s titles.

Today that perception of the format as being created mostly for children has changed as publishers, adults, and children are all equally fascinated with the beauty found in a good pop-up title.

When addressing the quality of a pop-up book the physical construction of the book itself is important. The publisher has used thick, heavy paper to house each and every page. The sturdy spine will survive a thousand readings and the color will be as bright in 2064 as it is in 2014. Measuring roughly 12 by 14 inches the book is large enough to bring out the detail in Dalí’s originals while losing little if anything in the process.

In Dalí Pop-Ups the concept of pop-up books has traveled nearly 800 years to bring us art that transcends age. (Providing of course that you are willing to explain “Dancer in a Skull” to a six year old . . .).This wonderfully designed work is a tribute to the creative mind of artist Salvador Dali.