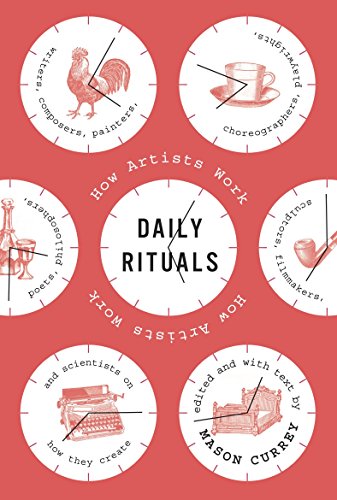 “Daily Rituals is a delightful exploration of the personalities and private-moment quirks of artists and writers . . .”

What makes the creative spirit emerge?

In Daily Rituals: How Artists Work author Mason Currey set out to compile the rituals of the day that welcome creativity by culling through hundreds of letters, diaries, and interviews by and with creative people.

Seeking to find the circumstances that lead each person to their creative process, Mr. Currey lets us in on the secrets of many famous people, revealing how easy or how difficult it is for an artist, composer, or writer to succeed.

Daily Rituals: How Artists Work is enhanced by photos of artist studios. The images are particularly interesting when considering the lifestyle of the 1800s and 1900s when the simplicity of life for an artist or writer was both intriguing and amazing in contrast to today.

Think how much earning a living has changed over the centuries; how people earned a living from meaningful creative work. While those who were committed to their work always used the time they had, they often had to wait years to see the results of their efforts, in publication or in a public exhibit of their art.

We who live in today’s distracted age may not be so lucky with our success, although the speed of life today also brings instant riches to creative and resourceful entrepreneurs.

As for the specific rituals and routines, whatever their routine comprised solitude, long walks, alcohol, or friends to break up the workday, or perhaps days of play followed by working until dawn, once ready to settle down, artists who relied on their talent to earn a living eventually produced work to generate an income. Note how remarkably productive people could be without the tech advantages and modern conveniences we have today.

Many artists had specific habits regarding their need for quiet. Perhaps they were not superstitious about maintaining a routine but had an awareness of the mindset needed to maintain creativity. Some examples from the book:

Ingmar Bergman defined moviemaking as “Eight hours of hard work each day to get three minutes of film.”

Gustave Flaubert was known to write only two pages a day, or two pages in a week, causing him to complain: “Sometimes I’m so discouraged I could jump out a window;” yet he eventually considered his writing of Madame Bovary a success.

Gertrude Stein consoled herself saying “If you write a half hour a day, it makes a lot of writing year by year.”

Toni Morrison was unable to write regularly, while managing a nine-to-five job and raising two sons as a single parent. Her ritual was to rise very early and “watch the light come.” She felt being ready for the light enabled her to write, as the morning brightened.

Imagine Marcel Proust, in the pre-computer years, writing from 1908 until his death in 1922, to create Remembrance of Things Past. With seven volumes and nearly 1.5 million words, he succeeded only by withdrawing from society to focus on the monumental work, rarely leaving the house, perhaps aided by the opiate he used as asthma medicine.

In the rituals of artists, composers, and writers, opium played a role in their productivity along with copious amounts of coffee. Many worked while spending the day in bed.

Daily Rituals is a delightful exploration of the personalities and private-moment quirks of artists and writers, a lighthearted look at the remarkable output of creative people over the centuries.

We come to believe there must be some value in creating a solid routine and respecting the rituals of creativity. Mr. Currey’s book contains charming stories of the techniques that helped bring much artistry to our 21st century culture.

Daily Rituals includes significant notes for those interested in the life of a particular artist.