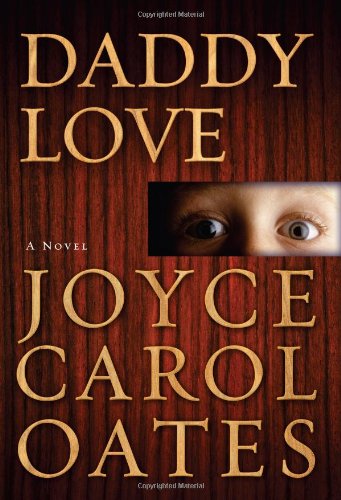 “Daddy Love pushes us to confront what lurks behind the front door.”

For six years, Robbie undergoes torture, sexual abuse, brainwashing, and conditioning until he accepts his abductor as family and turns to nefarious coping in result of his suffering. While his mother and father hope for his return Robbie forgets they exist.

In her familiar, unflinching style, Joyce Carol Oates’s Daddy Love pulls back the veil, delving into the wounds of a family ripped apart by a monster antagonist. Daddy Love is a near hopeless landscape and primer for how mental illness and criminal intention might grow within even the most innocent and promising.

In Ypsilanti, Michigan, 2007, Part I begins with Dinah Whitcomb’s motherly neuroticism as she steers her child through a full parking lot, an experience she relives in tedious repetition, offering ruminations of what a mother might perhaps suffer in such a trauma and loss.

By Parts II and III, the story moves forward into year 2013, when the abductor and his abductee have come to terms with their relationship, and Dinah as well as her husband have accepted they may never know what happened to their five-year-old son.

An important study throughout the work is the antagonist’s dual identity—father abductor, a.k.a. Daddy Love, and a religious man named The Preacher, a servant of the Lord and Church of Abiding Hope.

Reminiscent of the protagonist in O’Connor’s Wise Blood, Daddy Love shows as much savvy as a spiritual leader as he does as a sociopath, an interesting reflection although a bit overdone in its stark contrast and seemingly a stylistic choice, as the early chapters outlining the boy’s pre-abduction characterize his mother’s fawning and obsessive woman dedication and attention to her son’s exterior and imagined states. She worries in minute detail over how her son feels about not being able to find their car for the few minutes they are searching. One might believe Robbie Whitcomb, if not abducted, would have alternatively suffered under the neurotic upbringing of such a mother, who is admittedly something of a caricature.

The narrative falls into rhythm upon meeting The Preacher, a charming and charismatic speaker, as he addresses a black congregation: “The Preacher’s skin was pale and bleached-looking and if you came close, you saw that it was comprised of thin layers, or scales, of transparent skin-tissue, like a palimpsest.”

The Preacher speaks to the congregation about the coming of a black president. He quotes W. E. B. Dubois and Martin Luther King, Jr., appropriating the language he sees as most important to the congregation, completing the fuller and loathsome picture of a white man preying on the good graces of his flock and taking their money to fund his crimes.

Soon Daddy Love dedicates all his energies to the conditioning of what he believes to be his Dalai Lama-esque abductee—Robbie—whom he has renamed Gideon. Restraints, transporting, Pavlovian conditioning and abuse, visualization of Daddy Love’s physical and sexual torture, and the “iron maiden,” a coffin like contraption Daddy Love has made for the purpose of holding the boys he abducts—all contribute to painting him as the monster he is.

Though well written, the restraint and abuse scenes are extremely difficult to read in context. Each page brings new horrors the five-year-old boy must face and survive, providing a repellent but page-turning quality to the work.

It is thankful that Ms. Oates moves quickly from the abuse to the quotidian task of surviving abuse while simultaneously exploring the “father-son” relationship between Daddy Love and his Gideon.

Daddy Love is a book not to be taken lightly. It might be considered horror, and rightfully so, but in the bigger social context one could view it as analogous to a sort of religious terrorism wielded by an otherwise beloved respected, even idolized man.

Daddy Love could be a next-door neighbor. His Gideon could be any quiet, reserved child. In light of the 2012 Newtown murders, Daddy Love pushes us to confront what lurks behind the front door.

Rae Bryant is a writer of essays, reviews, and short fiction, a collection of which, The Indefinite State of Imaginary Morals, was released in 2011. Her stories have appeared or are soon forthcoming in StoryQuarterly, McSweeney’s Internet Tendency, BLIP magazine, Gargoyle magazine, and Redivider among other publications and have been nominated for the Pen/Hemingway, Pen Emerging Writers, and Pushcart awards. Ms. Bryant is editor in chief of the literary and arts journal, The Doctor T. J. Eckleburg Review. She is also a voting member of National Book Critics Circle and a member of the Author’s Guild.