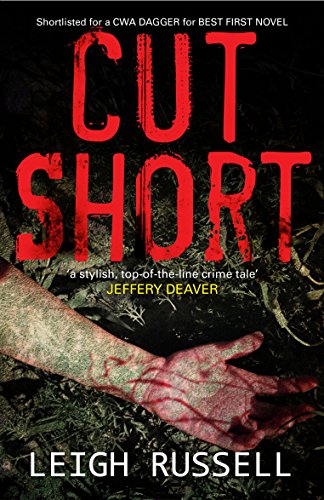 The story begins through the eyes of a delusional, mysterious man who has, apparently, murdered a woman in a park and hidden her in the leaves. He walks off, talking to an imaginary “Miss Elsie, “ when a woman asks him for directions; but he runs away, frightened, because Miss Elsie has warned him “Never talk to strangers.”

Soon the murdered young woman is found in the leaves by four-year-old Sophie and her nanny Gerta. Then the reader is introduced to Detective Inspector Geraldine Steele. Steele has just been transferred to this quiet English town of Woolmarsh and has purchased a flat nearby.

Both moves have resulted from her breakup with Mark, the man she lived with for six years. Mark’s complaint: Steele was always thinking about her job and sorting through facts and evidence. There was no room for a relationship.

Steele arrives at Woolmarsh convinced that she is “happy to be single and devoted to her work.” That will prove to be an illusion.
Steele joins the team investigating the murder—a strangling. She enters the “Incident Room” and meets fellow officers, including Kathryn Gordon, the tough senior investigating officer.

The “Incident Room” and the “Incident Board” identify this as a procedural, with officers sifting through and analyzing facts, interviewing witnesses and suspects, all the while filling the Board with pictures, notes, arrows.

The murders continue: in each, the killer holds the woman’s wrists with one hand and strangles her with the other—the work of a huge, strong man with large hands.

Every few chapters the story returns to the man from the park. The man’s name is Jim, and he is indeed huge and strong.
The reader will be frustrated as the police interview other suspects—such as the skinny boyfriend of the first murdered woman, obviously not the killer, one would think—but his history of criminal behavior makes him the prime suspect. All the while, Steele keeps thinking that there is just one fact, one connection that is missing. (In fact, there has been one clue passed up, one tiny but significant clue, that the reader may recall and may want to YELL out to DI Steele.)

It did occur to me at this point that we have yet to see Jim commit or directly talk about a murder. We only know that he is very disturbed and that he has hidden a woman’s body. Did he simply find the body? Is Russell playing a noirish trick on readers? I’ll leave that to the reader to discover.

The plot of Cut Short moves rapidly, with new victims, witnesses, suspects, and sub-plots. All fit together tightly, pulling the reader into the story. This depth and complexity, however, brings my main problem with Cut Short—just a small one. There were a couple of points later in the book at which I thought “No, not another character/subplot to remember.” Each time, though, that concern passed, and I immediately became immersed once again.

As the story races to its gripping conclusion, there’s not a moment when the reader won’t be either fearful for another possible victim, hopeful that the killer will make one fatal mistake, or desperately waiting for Steele to discover that one missing clue.

This is an excellent book—the kind one might read for hours on a winter evening before a roaring fire. Russell pulls the reader into an intense involvement with the characters, the town of Woolmarsh, and the search for the killer.