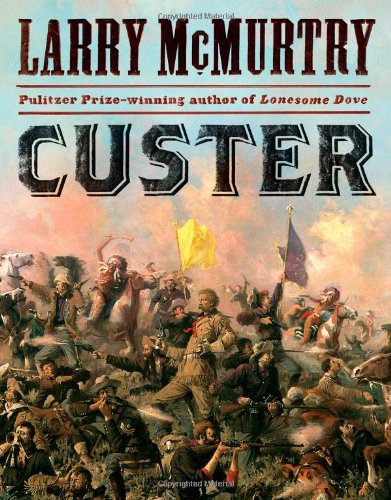 “. . . [Custer] even with the lush, evocative, and plentiful period pictures is a difficult read because it lacks a foundational and historical logic.”

“. . . If I were an Indian I think that I would greatly prefer to cast my lot with those of my people who adhered to the free life of the plains rather than to the limits of a reservation, there to be the recipient of the blessed benefits of civilization, with the vices thrown in without stint or measure . . .”
—George Armstrong Custer from My Life on the Plains

Larry McMurtry’s work Custer is characterized by the author as a “short life” of Custer.

With regard to this he writes: “I was attracted to the notion of a short life of Custer in part because the short life is itself a lovely form, a form that once was common in English letters.”

Mr. McMurtry then continues by observing: “One of the duties of the short life is to bring clarity to the subject. A historian, of course, can be clear and wrong, but clarity, in my view, is the one thing the historian or biographer owes his or her reader.”

Unfortunately, this reviewer believes that the purpose of this book was not clear, either as a history of Custer, or as an attempt to capture the essence of his life as it relates to that period of American history.

The author’s approach to Custer’s life is uneven and often disjointed. For example, though the book is lavishly illustrated, which would classify it as an excellent coffee table book, there seems to be no real logic to it or even an ability to demonstrate how the pictures link to and indeed advance the progression of the narrative. Further, the narrative itself is unclear!

As an example of this, Mr. McMurty states: “He (Custer) was much better at fighting his Civil War foes, who had trained in the same disciplines, at the same schools. But the Indians fought in a different way, and Custer never really got himself prepared for it.” In this book, the author really does not provide the specific historical analysis as to why this was the case, other than by characterizing him (Custer) as aloof and out of touch as in the following excerpt:

“Custer was far from being a gracious or easy commander of men. On marches her stayed aloof, or with his officers, making little effort to promote camaraderie. Though is general’s rank was brevet, meaning temporary, he soon began to behave as if it were permanent. He insisted on traveling with a cook, which meant a cook stove, which caused many delays.”

What Mr. McMurty does well is present a “literary rather than a historical view” of the Battle of Little Bighorn. Here he suggests that this battle is the point, “at which the narrative of the American settlement ends.” The author characterizes this by stating:

“A complex justice evolved on that battlefield, a justice that years later, was still being debated. Custer’s comeuppance became the America’s comeuppance, for three centuries of shabby treatment of the Native American Indians (my words), the taking of the Black Hills being merely the latest and most striking example. Custer’s defeat was the nation’s defeat, and, ironically, the Indians’ defeat as well. For three centuries the Indians had mattered. They had a secure place in the American narrative.”

Despite this, Mr. McMurtry would have been better served by writing a historical novel, as he has done successfully in other venues, as opposed to a short life. This would have provided him the opportunity to develop his historical narrative, and better use his story telling expertise to tie the work together with respect to both Custer’s dynamic and the arc of American history during this period more fully.

For example he could have more fully developed his substantive historical concept of an “American Passion play” to explore a richer vein of story telling throughout the book, as he observes:

“Dramatically speaking, one of the things it had going for it was a powerful cast of characters. Performing for the American military were Custer, Mackenzie, Crook, Sherman, Sheridan, Miles, and Grant. For the natives we have Crazy Horse, Sitting Bull, Gall, Red Cloud, Dull Knife, Little Wolf, Spotted Tail, and others. It was always obvious who, in the long run, was going to win, making the gallantry of the losers even more appealing.”

Larry McMurtry’s work, even with the lush, evocative, and plentiful period pictures is a difficult read because it lacks a foundational and historical logic. He would have been better served to create a work with a thematic centerpiece and a more compelling, consistent, and detailed narrative.