Curveball: The Remarkable Story of Toni Stone the First Woman to Play Professional Baseball in the Negro League 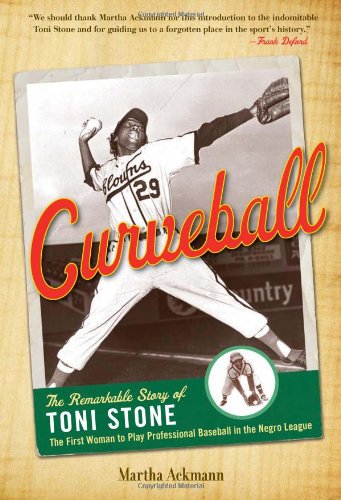 Like many of today’s women players, Toni Stone grew up loving baseball and playing it every chance she got. And also like them, she often found it tough to get into the boys’ and men’s games. So how did this skinny black girl rise all the way up to the men’s professional Negro League Baseball?

Known during the first part of her life as Tomboy Stone, she sought athletic help from the Catholic Church, her public school teachers, semipro ball coaches, and the American Legion, as well as by reading baseball biographies. She hung around parks and players, made herself useful, and practiced until she had become so visible to the other players, coaches, instructors in baseball schools, and managers that they simply could not overlook her and her skill. She reached her goal mostly through persistence.

Marcenia Lyle Stone grew up in Depression-era St. Paul, where she excelled in track, the high jump, and skating, but baseball is what she loved. Because she lived a black neighborhood she suffered the discrimination and racial taunts common in the United States, South or North, of the 1930s.

After she joined traveling teams, she and her fellow players experienced the same exclusion because of color that William Brashler described in his well-known 1976 novel, The Bingo Long Traveling All-Stars and Motor Kings. Particularly in the South, finding a restaurant that would serve black teams and a motel that would accept them for the night sometimes proved impossible. And because Toni was a young woman traveling with men, some fans, suspicious of her morality, called out insults to her. Some teammates became jealous of her popularity or decided she wasn’t really good enough to play with them.

What kind of life was that for a woman? It was the life Toni wanted, much like the life of Elizabeth Murphy of Rhode Island, another skinny girl who played only with men’s traveling teams in the decades just before Toni played and was known as “one of the fellows.” Murphy commented, “Once they saw I could play baseball, they accepted me.” For years Toni fit in with her teammates in much the same way.

Most local newspapers treated Stone and Murphy as serious players, but mass media magazines presented trite and frivolous pieces; Ebony featured Toni putting on makeup instead of playing ball, just as a Boston paper featured Elizabeth Murphy in an apron cooking dinner. The less the reporter knows about a subject, the more he or she will depend on stereotypes.

Late in life Toni Stone, finally recognized for her unusual accomplishments, found an audience that realized she had been a serious player, not a freak: a strong woman who had the courage to follow her bliss. Yet her managers used her in only part of each game, thus emphasizing her difference from the others rather than treating her as a steady, regular player.

The research performed for this book by Martha Ackmann and her many research assistants (lucky her!) makes the story of Toni Stone a historical biography full of rich detail.

Wherever Toni has lived, Martha and her helpers have found out who else lived there during that period of history and have shown how Toni fit in with the locals. Whenever someone became connected with Toni, studious researchers found out exactly who the person was, discovered his or her background, and revealed the significance of that person in Toni’s life.

Such information places Toni Stone in American history as nothing else could, although there are times when the introduction of this background moves the story too far away from its focus. My only other caveat about the presentation is that the book hardly strays from its dependence on chronology, and toward the end the story is told almost day by day. An attempt at topical arrangement, with head sentences for every paragraph, would have improved the writing.

To obtain all this information, Ackmann received (and has acknowledged) support by grants of time and/or money from five different institutions. Is it possible that educational groups have finally decided that scholarship on women in baseball is worthy of backing?

Nobody loved the game more or put up with more in order to play it than Toni Stone did, and she had enough self-esteem to handle almost everything that came her way. Her personality comes through in this touching and perceptive remark: “I had to play. I had to find the heart of the game.” I think she did.