Curt Flood in the Media: Baseball, Race, and the Demise of the Activist-Athlete 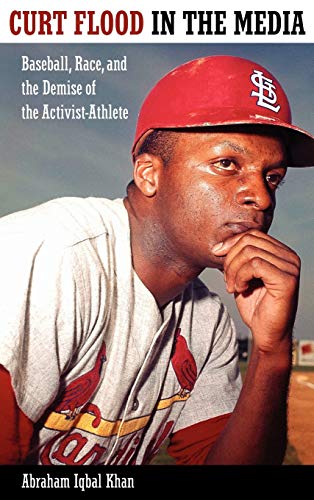 “Mr. Khan’s work on Curt Flood makes for a good introduction to the player’s position in baseball history, but Curt Flood in the Media could have used less linguistic and more historical analysis.”

For nearly a century the reserve clause in professional baseball players’ contracts provided a way for the owner to control players’ movements.

By stating in the contract that the owner reserved the right to the player’s services for the year following the actual contractual period, the owner could keep the player from leaving the team as long as desired, or could sell his services to whatever team wanted him, whether the player agreed to the change or not. The reserve clause was also used to keep salaries down by forcing players to sign at whatever salary the owner wanted to pay.

Not until player Curt Flood refused in 1970 to be traded to a team he thought undesirable was this questionable device tested legally.

The author of Curt Flood in the Media: Baseball, Race, and the Demise of the Activist-Athlete is less interested in the facts of the case and the merits of the arguments for and against Curt Flood’s activism than he is in the type of language used to express those opinions. His book analyzes media comments made about ball player Curt Flood as a method of understanding the way the public came to view Flood’s attempt to get Organized Baseball to eliminate or modify the reserve clause.

Characterizations of Flood by reporters, scholars, and other commentators provide the clues for Professor Khan’s depiction of the changing view of Flood over the years, first as self-promoting, high-earning complainer and later, as his contribution became better understood, as martyr to the cause of economic freedom for athletes.

Author Khan’s story ranges from the advent of Jackie Robinson in the majors in 1947 all the way up to 1967 and the failure of Flood’s case in the Supreme Court. Along the way he covers the questions of whether Flood’s race affected views of his case (answer: at first, yes; later, not so heavily); how much the black press and the communist press contributed to public understanding of Flood’s effort (a lot, and not always in ways that clarified his case); and how Flood is often viewed today (as precursor of the self-absorbed black athlete who pretends to be integrated but is really disconnected to anything but corporate America).

Mr. Khan’s retelling of the argument between Flood and he owners emphasizes Organized Baseball’s initial insistence that deleting the reserve clause would destroy professional baseball, thus making the reserve necessary for “The Good of the Game,” a phrase the owners used about as often as “The End of Baseball as We Knew It,” a term that scholar Charles Korr used as the title for a book about the formation of the Baseball Players’ Association, the first really effective union of baseball players. The Association helped members understand their position as employees who need to negotiate certain common economic problems as a group.

Mr. Khan’s approach to the Association limits him to explaining how the new union was viewed instead of crediting the Association appropriately with great changes in the players’ economic position. Since Flood’s efforts and the Association’s work, all professional athletes enjoy, or can look forward to, some form of free agency.

Furthermore, Mr. Khan’s analyses, rather than stemming from the validity of commentators’ arguments, are based on rhetorical theory. As a result, the text is loaded with the jargon of the field.

He speaks, for example, of “forms of affect and expressivity,” “rhetorics of disincorporation,” “subaltern counterpublics,” “resistant discourses,” and “rhetorical consonances,” terms that for non-specialists make for murky meaning. He can write clearly, too, but seems to prefer long sentences cluttered with unfamiliar compound nouns.

Perhaps his only factual slip is calling Jackie Robinson “the first black Major Leaguer.” Robinson was, of course, merely the first black in the modern majors, since several blacks played in the American Association, which was the major league of the 1880s, before they were all gradually fired because of the racially discriminatory tendencies of the 1890s.

Mr. Khan seems to view Robinson as an activist-athlete, even though this player was not allowed to defend himself appropriately against racial epithets and actions until after two years of play. He gives considerable attention to the decline of the activist-athlete that some commentators remark upon, viewing today’s black athletes as selfish men who think only of their salaries and their income from selling the rights to manufacturers to use their names.

For some, these players are “traitors to their community” because they have forgotten what it took to become accepted on formerly all-white teams. These players are today often viewed as displaying the same attitudes as their white teammates.

One could ask: Isn’t that progress? At least, the black players fit in. And shouldn’t the white players, too, be expected to have a broader view of their role, one in which they take part in community life instead of standing apart from it? Some do, of course, but many appear aloof, concentrating on ways to make money.

Perhaps the cleverest chapter is The Disappearance of Curt Flood’s Blackness, explaining that as his public began to grasp Flood’s point as an economic rather than a racial one, his color lost much of its importance for them, and those interested in more freedom for baseball players gained credence in the eyes of the public.

Mr. Khan’s work on Curt Flood makes for a good introduction to the player’s position in baseball history, but Curt Flood in the Media could have used less linguistic and more historical analysis.