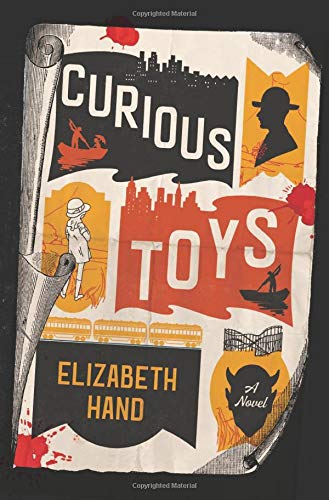 “One of Hand’s remarkable abilities is the deftness with which she creates dynamic and unique voices for each point-of-view character, helping the reader track multiple storylines throughout a complex tale.”

Recognized for her exquisite use of language, Hand begins the novel with a distinct voice. “An accident, not his fault. Wouldn’t stop bouncing, set her on fire and policeman choked him, big hands yes your fault, not an accident don't you lie to me.”

Chapter two introduces readers to the protagonist, Vivian Onofrio, a 14-year-old girl struggling with poverty and a family tragedy.

When Vivian’s little sister Abriana goes missing, along with several other little girls, her mother decides Vivian would be safer disguised as a boy.

In the stifling summer of 1915, Pin discovers unlimited freedom in her newly found gender. She works odd—often illegal—jobs and roams the grounds of the Riverview amusement park, where her mother works as a fortune teller.

“She knew the work was risky, but it never felt dangerous. If she’d been a fourteen-year-old white girl roaming the South Side or Packingtown, sure. But no one blinked to see a white boy the same age sauntering along the Golden Mile . . . hands in his pockets and a smart mouth on him if you looked at him sideways.”

Pin and her mother live under assumed names in the park in abysmal squalor. “Near-indigents, like Pin and her mother, squatted in makeshift shelters so they could save enough to pay for a tenement during the winter months.”

Hand beautifully captures the era in this historical novel alongside the landscape of Chicago and its neighborhoods and slums. “Little Hell was overshadowed by a huge gas house which belched flames and fumes that blotted out the sun.”

She also captures the remarkable world of the amusement park, from the rides and the midway to the sideshow freaks.

“Pin was always amazed at how the illusion persisted. She knew Max was a man dressed—half-dressed—as a woman yet the combination of pink lights and shadows, and Max’s own peculiar magic, really did summon a woman up there on the stack of wooden creates covered with a muslin sheet.”

Max is one of the many denizens of the amusement park and nearby communities that Pin interacts with, including actual historical figures such as the eccentric outsider artist Henry Darger.

The world Hand creates is more than just a backdrop for a crime. The locations act as a character. When Pin discovers the body of a young girl killed inside a boat ride—aptly named the Hell Gate—the carnival architecture functions like a participant in the violence.

“[Pin] watched in horror as the body began to move, sliding slowly across the ledge until with a soft splash it fell into the water and floated, face down, drawn inexorably by the current through the tunnel.”

Hand constructs her novel with multiple points of view, including that of the killer. One of Hand’s remarkable abilities is the deftness with which she creates dynamic and unique voices for each point-of-view character, helping the reader track multiple storylines throughout a complex tale.

Despite its historical setting, Pin’s contemplations about gender identity, the inclusion of racial tensions, and questions regarding police behavior, place the story squarely in a modern context.

Though amusement park rides have become far more complex than the love boat ride of Hell Gate, the struggles of the characters remain, sadly, current.

Another magical location for the novel is the Essanay movie studio. Its here that Pin befriends a young actress and becomes entranced with the nascent film industry.

Employed by a screenwriter to run certain errands, Pin also discovers a different kind of make believe than the carnival atmosphere of the amusement park.

An appearance by a crude Charlie Chaplin provides another nod to the contemporary world and the #MeToo movement where society has long accepted bad behavior due to the power of famous men.

Regardless of connections to the present, Hand presents us with a detailed and complex representation of the challenges for impoverished and psychologically fragile individuals in 1915 America.

Equally important, in the midst of it all, Hand fashions a darn good mystery.