The Cure for Dreaming 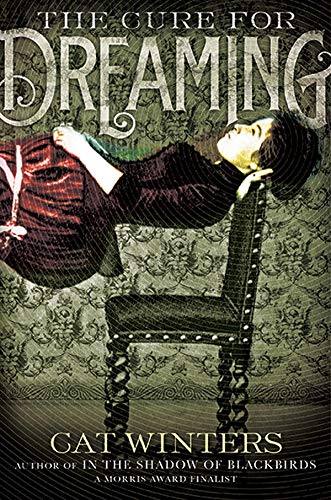 The Cure for Dreaming is set in 1900s Oregon, with the backdrop of the suffragist movement. Olivia Mead is called on stage to be hypnotized by the young and famous Henri Reverie. To her embarrassment, her father makes much of this when he learns Olivia did everything she was told on stage (though nothing scandalous). He decides to enlist the hypnotist to cure Olivia of her suffragist leanings and to put her in her place to live the life she is meant to, which means getting married, having children, and being subservient first to her father and then a husband.

But Olivia dreams of freedom and going to college, of voting.

When Henri hypnotizes Olivia he tells her, “All is well. You will see the world the way it truly is. The roles of men and women will be clearer than they have ever been before. Instead of getting angry, you will say ‘All is well.’” What transpires is that Olivia can now see peoples’ true natures, which manifest in visions of darkness and light, good and bad, while at the same time she is unable to speak her true thoughts aloud, much like Cassandra of Greek mythology.

Unfortunately, Percy tries to take advantage of Olivia one evening, and because of her inability to get angry, all she can say is “All is well” to him as he bites her neck. While there are supernatural elements at play, the author Cat Winters, pulls her punches in this novel—the vampire biting stands in for rape, which it should have been—and the budding sexuality of Olivia is saccharine with her embarrassed thoughts and spurts and stutters in her language as she tries to talk to Henri about what Percy has done.

Through this gift and burden, Olivia’s father becomes a true monster before her eyes and oppressed women become shadowy figures. Meanwhile, Olivia has the chance to escape to her mother, an actress in New York, who has sent her a one-way ticket, but Olivia wants to undo the hypnotism first.

Olivia turns to Henri for help, but Henri’s sister is desperately ill, and he needs the money Olivia’s father has offered for further service: to show how Olivia now becomes ill at the mention of suffragettes at a meeting of The Oregon Association Opposed to the Extension of Suffrage to Women. The money will disappear if Olivia’s submissiveness does as well. Recognizing the danger he has placed Olivia in, Henri promises to help.

This is a coming of age story of a young girl and her dreams. Interestingly, the hypnotized blessing and curse that inhabits Olivia parallels the 1900s—the inability of women to truly speak their minds, the suffering they had to endure at the hands of men, and their very natures being snuffed out by their near subhuman status.

Interspersed among the chapters are quotes of the time period as well as advertisements and photographs; though these are interesting, they don’t lend to the overall story itself and act as a distraction. This young adult novel tries too hard to be high fantasy through its use of flowery prose and slightly awkward dialogue. The writing itself is mediocre, similar in tone to Eragon in an attempt to be striking and unique but just falling flat. The Cure for Dreaming could use some heavy editing in order to tighten the prose and flow of the narrative.

Readers who enjoyed Cat Winters’ previous book, In the Shadow of Blackbirds, will enjoy The Cure for Dreaming. Overall, the book is a good introduction for young readers, with a paranormal twist, to the suffragist movement and to the oppression of women during the 1900s.