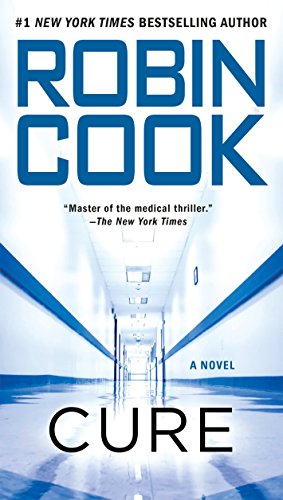 Robin Cook’s latest release, Cure, offers the reader intrigue and suspense, as well as in-depth insight into the world of international organized crime and scientific medical research. This gripping tale introduces competing Japanese and American crime families hoping to corner the market on a new discovery with stem cell research that purports to cure to disease as well as prolong life.

Founder of the New York company iPS, USA, LLC, Dr. Benjamin Corey is determined to explore the commercialization of human induced pluripotent stem cell research, hoping to make millions. Breaking into the Kyoto University, he manages to steal the research notes of noted scientist Satoshi Machita. Ben then spirits Machita and his entire family to the United States with the enticement of a lucrative position and freedom. He manages to pull this off even with the knowledge that two branches of the Japanese mafia are warring against each other to have the scientist and the results of his research in their own pockets.

When Machita goes missing, Ben surmises the man has taken his family on vacation. Worried after a few days, he decides to try to locate his employee, only to come upon a horrifying discovery: Machita has been murdered in the subway by two Japanese hit men and left without identification. His body, delivered to the New York City Medical Examiner’s office, is autopsied for cause of death by Dr. Laurie Montgomery.

Dr. Montgomery, recently returned after an extended maternity leave and having had to deal with her infant son’s catastrophic illness, wants to prove to herself and her peers that she can handle the rigors of her job. She thinks performing the autopsy of the unidentified Japanese man should be an easy first case, though that does not prove true. She cannot find any pathology to explain why the man has died and decides to investigate further. As she digs deeper, she receives a threatening letter demanding that she stop looking into the cause of the yet unknown man’s death. Thinking the letter was written as a silly prank by her husband and colleague, Dr. Jack Stapleton, she pays little heed. However, when her son’s life is later threatened, she learns Jack did not send the note. Upon further investigation, she brings to light some disturbing conclusions.

Though this book offers a combination of high-spirited medical drama and corruption, this reviewer found much of this storyline difficult to follow. Even with the inclusion of a list of key characters, between the opposing crime families and the many characters, losing track was easy. In all, after a slow start, Cure builds sufficient momentum toward its conclusion, creating a highly charged, though somewhat difficult, read.