A Cup Full of Midnight 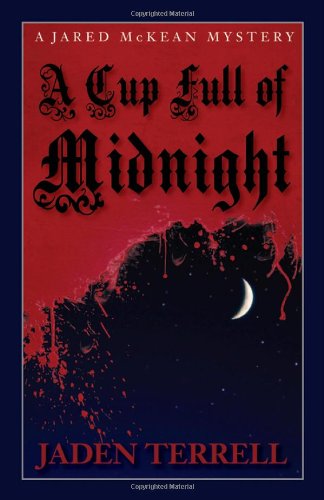 A Cup Full of Midnight is a dark mystery, hence I suppose the title, but it’s more mainstream than dark. The story could conceivably take place in any community across the nation since it involves young people who emulate vampires and embrace the Goth culture—not my cup of tea.

But Ms. Terrell succeeds in giving her novel broad-based appeal because above all else, Cup is a damn good mystery.

Cup is a follow-up to the author’s first novel, Racing the Devil, in which she debuted her protagonist, private detective Jared McKean. McKean, like most private detectives, has a history that plays a role in why he does what he does. In this instance, we find Jared McKean still trying to reconcile his dismissal from the Nashville, Tennessee Police Department’s Murder Squad, and his divorce from a woman he still loves. Throw in a son with Down Syndrome, and a best friend who’s dying of AIDS, and you have a man more anxious than a long-tailed cat in room full of rocking chairs.

Jaden Terrell’s writing is engaging and her story is finely wrought, particularly since she writes the story in the first person point of view, which is very difficult to accomplish successfully—and she writes it from the male perspective. Well done.

Most of the language she uses feels authentic, with the exception of referring to a Glock pistol as having a safety—it does not; and she called the gun’s magazine a clip. Distracting.

The author’s narrative focus on young people involved in the vampire and Goth phenomena is spot on. Her story illustrates the dangers involved and how quickly youngsters gravitate toward and follow those who take on strange and seductive personae. Parents beware.

This murder mystery features ample suspects and plot twists, making Cup an involving read. The author has also written a story requiring an analytical and intelligent reader because figuring out who the killer is is not so transparently easy.

A Cup Full of Midnight certainly proves that Jaden Terrell has the skill to write a detective series with the potential of building a loyal following. Her style, her subject matter, and her ability to build complex cases and realistic characters guarantee that Ms. Terrell will be around for a long time.