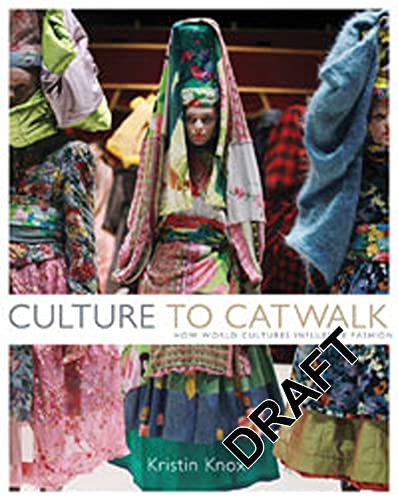 “Culture to Catwalk stands out for providing information on the history and contemporary politics of each country and for discussing the ways in which fashion, like the arts more generally, is political.”

This is the type of book those with a sensibility for fashion and multiculturalism will thoroughly enjoy—whether active in the creative field or simply happy experimenting with their own wardrobe and accessories.

Kristin Knox has compiled a colorful and useful reader on the cross-cultural influences in dress and style and how these operate at different levels. Organized as a country compendium, Culture to Catwalk: How World Cultures Influence Fashion provides information on how traditional dresses have inspired local and international fashion designers, as well as the development of local fashion industries and their dynamic interactions with the fashion centers in Paris, London, Milano and New York. The book is an adaptation of the ten-volume Berg Encyclopedia of World Dress and Fashion published in 2010.

Besides photos that exemplify the parallels between culture and catwalk, Culture to Catwalk includes the names and brand labels of the new generation of fashion designers who today come from around the world, and unlike in previous times, also increasingly work around the world.

As Kristin Knox writes, fashion is now in the process of returning to its original homelands. This has not only revitalized the fashion industry, but is also ushering in a new era in fashion design within haute couture per se as well as where high fashion interfaces with street style.

Culture to Catwalk stands out for providing information on the history and contemporary politics of each country and for discussing the ways in which fashion, like the arts more generally, is political. One of the most fascinating chapters is that on the gradual transformation, through fashion, in the Middle East of the Islamic traditional burqa or abaya. Culture to Catwalk is also instructive about how avant-garde fashion design, such as that practiced by Turkish-Cypriot designer Hussain Chalayan, builds a bridge between different worlds, as well as between the modern and the traditional. In doing so a style resists the traps of assimilation while challenging the more superficial attractions of cosmopolitan fusion.