The Cultural Intelligence Difference: Master the One Skill You Can't Do Without in Today's Global Economy 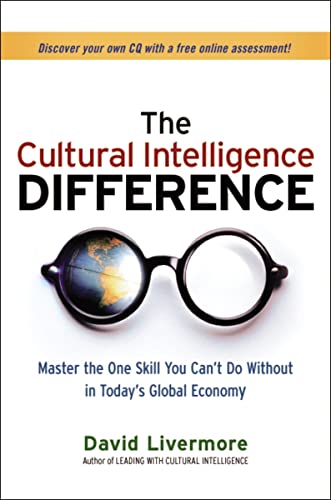 “Dr. Livermore’s contribution is most important and significant. Cultural competency shall be an even more important capacity, especially for those in a minority making their way in a new place and for those previously in the majority, who shall find the cultural character of their place changing, so that in the future, they shall be in the minority. Indeed, because this describes all of the people in the United States and the majority in many other countries, this book and Dr. Livermore’s Leading with Cultural Intelligence, are most relevant for many and deserve a wide audience.”

The Cultural Intelligence Difference is David Livermore’s follow up handbook to his important Leading with Cultural Intelligence. The subject volume can be considered as a training program in a book format, a how to be effective guide in a multicultural world. Those who have not read his first cultural intelligence book, which in certain ways is the stronger of the two, would do well to read that volume prior to this one.

Notwithstanding his recognition of the proliferation of books on various forms of specialized intelligence—artistic, business, emotional, financial, to mention but a few—David Livermore asserts, “The number one predictor of your success in today’s borderless world is not your IQ, not your resume, and not even your experience. It’s your CQ.” CQ is the acronym for Cultural Quotient, representing your cultural capability, specifically your capability to function effectively in diverse cultural contexts.

Significantly, he explicitly incorporates adaptability in defining intelligence as the “mental, motivational, and behavioral capabilities to understand and adapt effectively to varied situations and environments.” Since our environments are ever more diverse and evolving—as a consequence of the demographic composition of our places reflecting the continuing movements of people arriving from other places and people leaving for other places—effectively adapting to varied and continually varying environments is an important, some would say essential, competence for effectively functioning in contemporary society.

The intersection of new arrivals in a place and departures from that place means that in many places the newly arrived account for an ever growing share of the composition of a place’s population and those born in that place represent a diminishing share of the place’s population. Consequently, what might have been adequate, even superior cultural intelligence in earlier times, can quickly become inadequate, even inferior cultural intelligence today and especially tomorrow.

The author effectively weaves together different aspects of cultural intelligence, through an evolving story line of an executive—an African American, in a company in which workers of his race are very much in the minority—whose daughter is studying overseas. This executive struggles to cope with interviewing and eventually hiring a woman from Yemen, whose cultural references and expectations are so very divergent from his own.

Concurrently, he is navigating the complexities of a major transaction with a substantial enterprise based in the Middle East. Many readers may find that reading this story, which appears over several chapters, prior to the primary body of the text provides a useful foundation for the particulars of cultural intelligence covered in the book proper.

Increasingly, mangers are expected to lead teams composed of people from diverse cultures. More and more, marketing strategists are challenged to translate a message that works in the culture of one place to be effective in another place and culture. Cross-border joint ventures challenge the naive extension of the fundamental premise that what works in one place and its culture can be successfully applied to another place and its culture. Indeed, more important than translating documents to a different language and adjusting for the very different legal system that might be encountered, is to adjust for the cultural differences between different places.

Dr. Livermore asserts that his Cultural Intelligence model is differentiated from other intercultural approaches by its being an evidence-based meta-model for diversity and international work, explicitly rooted in contemporary theories of intelligence, more than just knowledge, not culture-specific, and focused more on learning capabilities than on learning traits. His discussion of intelligence would be strengthened by explicit exploration of the groundbreaking work of Howard Gardner concerning initially seven, subsequently expanded to eight, distinct intelligences. Dr. Livermore’s thesis is fully compatible with Dr. Gardner’s premise that intelligence is unique to a distinct domain for competence in one domain does not necessarily translate to competence in another.

One way to think of intelligence is as the mastery of a series of decisions rules to guide comprehension, strategy, decisions, action, and behavior. But distilling the essence of intelligence to a measurable set of elements is daunting, for intelligence is characterized by overwhelming complexity, flexibility, ambiguity, subtlety and contradiction, as Douglas Hofstadter illustrates in Godel Escher Bach: An Eternal Golden Braid.

Mr. Hofstadter advances the insight that capturing intelligence in a collection of decision rules is elusive, perhaps unachievable, for layer on layers of meta-rules are necessary to determine when the enormous number of rules should and should not apply. Exploring the parallel implications of computational precision of machines and the creativity of the arts in his masterful Pulitzer Prize-winning treatise, combining mathematics, art and music is a multidisciplinary philosophic inquiry of the subject, in the spirit of Lewis Carroll, Mr. Hofstadter asserts intelligence would include synthesis, distinction, pattern recognition, and innovation.

Appropriately, Dr. Livermore’s cultural intelligence model is more conceptual than concrete; more a way of being, thinking, strategizing, and acting, than a collection of rules. To this end, he emphasizes the components of cultural intelligence: interest in different cultures; understanding cultural issues and differences; strategizing and making sense of culturally diverse experiences; and adapting actions, verbal and nonverbal, to be appropriate to the cultural context. This approach is consistent with the idea that defining intelligence precisely is problematic, even, some would say, implausible, because intelligence appropriately embraces logic, metaphor, framing, paradox, intuition, context, and creativity.

Included with Leading with Cultural Intelligence is access to the CQ Self-Assessment, which assessment involves some 50 questions, resulting in a 12-page personalized CQ Feedback Report. The CQ feedback Report provides absolute scores for the four specified cultural attributes: (1) Motivation (level of interest), (2) Knowledge identify what is necessary to understand), (3) Strategy (capacity to plan for multicultural, and (4) Interaction behavior (adaptability when relating and working interculturally). These absolute scores are compared to others in the world who have completed the assessment, and suggestions plus exercises are provided for enhancing your cultural intelligence and facility.

Significantly, the CQ measure of cultural intelligence is a self-assessment, not an objective third party evaluation. Accordingly, the assessment is more a reflection of awareness, sensitivity, and intent that it is a measure of knowledge, competence and facility.

While Dr. Livermore does offer an expanded version involving peer perspectives to provide a 360-degree assessment, that assessment is similarly based on perception rather than on mastery of substantive knowledge. Thus, an individual’s self perception of his or her culturally intelligence—which self-perception could be reinforced by peers, either naïve or fawning—could be less than an accurate reading of that individual’s culturally competence, both experientially and also in terms of absolute knowledge of the cultures and cultural norms of different places.

In this regard, consider the role of Inspector Clouseau in the The Pink Panther, played first by Peter Sellers and subsequently by Steve Martin, who most probably would have reported a very different “cultural intelligence” assessment than might those with whom he interacted based on the time in which the role was performed.

The author’s argument would more appropriately be framed by advancing cultural intelligence as being a necessary condition for success, rather than the most important factor. While Dr. Livermore acknowledges this perspective in his subtitle—Master the One Skill You Can’t Do Without in Today’s Global Economy—at various points in his text he appears to overreach. Further, in some places his research is less than it might be, as key statements are not cited and references to important relevant research are inconsistent and/or incomplete.

Setting aside certain shortcomings in the framing and presentation of this book, Dr. Livermore’s contribution is most important and significant. Cultural competency shall be an even more important capacity, especially for those in a minority making their way in a new place and for those previously in the majority, who shall find the cultural character of their place changing so that in the future, they shall be in the minority. Indeed, because this describes all of the people in the United States and the majority in many other countries, this book and Dr. Livermore’s Leading with Cultural Intelligence, are most relevant for many and deserve a wide audience.