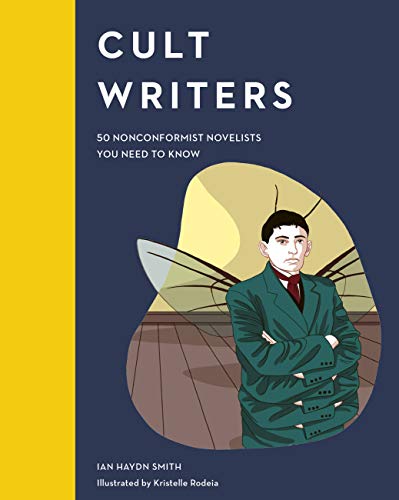 “Regardless of one’s knowledge of any of the 50 writers discussed, Cult Writers is intriguing and informative.”

In Cult Writers, Ian Haydn Smith has selected 50 authors who do not or have not conformed to writing as most readers know it or expect it. Many names are recognizable to the average reader, such as Ralph Ellison, J. D. Salinger, Ayn Rand, or Virginia Woolf. Others may fall into the “I’ve heard of her/him, but never read their work,” such as: Albert Camus, or Jim Thompson. And then there are those that many are not familiar with: Haruki Murakami, Irvine Welsh, or Boris and Arkady Strugatsky.

Regardless of one’s knowledge of any of the 50 writers discussed, Cult Writers is intriguing and informative.

Smith takes each of these characters, and they are characters to be sure, and briefly talks about their personal history and most importantly their writing styles—that which catapulted them onto the list of cult writers.

Colette takes the stage as the one born earlier than any others, in 1873. She is described as a rule breaker who “challenged societal norms to live her life as she wanted, while producing a Nobel Prize-winning body of fiction that celebrated the sensuality of the world around us.”

The youngest of the select few is Douglas Coupland, born 1961. Certainly, he fits the category of the Digital Age Savant, who “emerged from a desert in the early 1990s, carrying with him an era defining portrait of a generation.”

The authors discussed surfaced from around the globe—Japan, Russia, France, the United Stated, Canada, Mexico, Germany, China, England, and Guadeloupe, just to name a few—a global cast of characters, indeed. Male, female, old, young, introverted and extroverted, and with every ethnicity imaginable. A truly diverse selection of authors; each writer brings his or her own personality to the table.

Smith’s biographies of this cast are concise, generally one or two pages, in which he discusses what made each special in his or her own right. When one looks for some characteristic that ties one to another to another—something that defines how they all arrived at this spot, it’s very difficult to pin that one thing down.

Many had difficult childhoods—Jean Rhys had a “testy relationship with her mother” and she was “mocked for the apparent strangeness of her accent” and yet “this sense of exclusion would give Rhys’s writing a unique perspective.”

And yet the other side of the coin is William Burroughs, “born in St. Louis into a wealthy family.” A graduate of Harvard he was “free to explore his interests” as an icon of the beat and hippie movement.

Several of our troupe met sad deaths. Poet and author, Sylvia Plath, certainly near the top of the list where she is described as a woman with a “troubled soul that would eventually consume her.”

Near her on the list is Yukio Mishima, a man confronting his “blurred sexuality” in a culture that did not abide homosexuality. Mishima became involved with a failed military uprising that resulted in him committing hara-kiri at the young age of 45.

We also get to meet the literary recluses such as J. D. Salinger who spent a lifetime “shunning the world’s attention. Yet the best shunner of the list is Elena Ferrante, who Smith describes as “The Anonymous Author.” Little is known about Ferrante or her life, but her stories focus on “the painful clarity [of] the way patriarchal society subjugates women and the violence that stems from it.”

While it is hard to pick one who stands out from the rest, certainly a strong contender would be Zora Neale Hurston, The Queen of Harlem. She studied at Morgan Academy to complete her basic education, then continued her education at Howard University where “she co-founded the university newspaper, The Hilltop. She moved to Harlem, where along “with Wallace Thurman she formed the ‘Niggerati; a group of writers who produced the magazine Fire!!’ And existed at the epicenter of the Harlem Renaissance.”

Each author discussed in Cult Writers has worked hard to earn their place, even if they did not realize where they were going. The book is a must read for any writer who wants to move beyond the routine. Who knows who might end up in the next volume of Cult Writers.