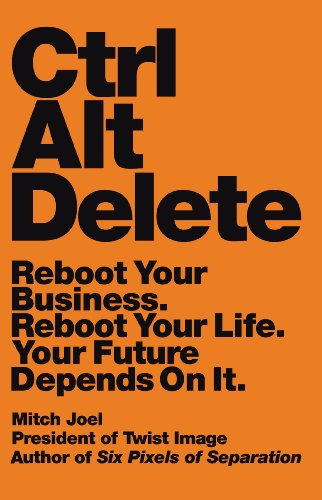 The Dean of Harvard Law School was famous for his mid-20th century opening day talk to first year law students, proclaiming “Look to the left of you, look to the right of you, one of the three of you will not graduate.” The old school premise of guaranteed success—if you could gain admittance to a prestigious professional school and then graduate your success was guaranteed—is no more.

Fast forward to the 21st century: “The next time you attend a conference, I want you to look to your left and then to your right.

“In the next five years, odds are that one of the three of you won’t be around,” proclaims Mitch Joel in opening Ctrl Alt Delete: Reboot Your Business, Reboot Your Life. Your Future Depends On It. This very “message of hope” that he opens his book is the same message that he conveys when he speaks to audiences globally.

Adapting his title from the process to get a stuck computer functioning again—concurrently hit the Ctrl-Alt-Delete keys in order to—start up again—Mitch Joel asserts that those who can’t get out of the struck mode and reboot won’t make it.

Businesses and individuals alike are confronted by “this massive and constant transformation that is happening in our post-disruption world. The fallout is going to be very bleak for many businesses. With that comes massive opportunity for the companies and individuals who are brave enough to see this as a once-in-a-lifetime-chance to do something amazing with their lives.”

This duality is reflected by the reboot program he offers to help in the “transition from being a ‘jobber’ (someone working nine-to-five, clock watching, and waiting on your pension plan) to someone who is doing the work that you were meant to accomplish. That’s the real big idea here: the future of business isn’t about what’s written in a contract, it’s about what we do with every waking moment to make it count.”

His approach pairs business and the individual, topics typically treated separately and independently.

Among five major movements that Mitch Joel addresses is “the shift towards direct relationships with consumers, from broadcasting and pandering to utilitarian marketing, and the conditions from four screens to one.” He asks whether TV, computer, tablet, and mobile are “really all that different anymore???” He advises to “stock counting screens,” which “are everywhere,” and “largely useless; nothing happens until they’re connected to a networked.”

The provocative section heading: What is TV? What is a book? What is a website? What is a map? is indicative of the reboot imperative spirit he brings to his guide.

He observes, “Media is evolving quickly, and it’s less about what you’re doing with social media and more about taking a broader perspective when thinking about the media you are creating.”

He suggests, “The way to do this is to view your media as either passive or active at its core—with the knowledge that people will also do with it what they will.”

Among the many provocative takeaways from Ctrl Alt Delete is the imperative to live, be, and do this new rebooted style, for as Mitch Joel advises, “Consumer-centric can’t just be your business jargon.”

Pointedly, he proclaims, “Customer-focused in 2013 means looking at things as a consumer and not as a business person. It may sound overly simplified, but how we think about business during regular working hours is usually diametrically opposed to how we act as consumers.”

In the second half of the book he turns his attention to “reboot: you.” This involves digital-first posture, recognizing and embracing that careers are going to reflect “the long and squiggly road,” making the case for “new thinking for the new workplace,” “the marketing of you,” and more.

Promising readers that his “book will help you become amazing,” his clever, facile, quick-with-the-quip media maven style is evidenced by such phrases as “from madmen to math men,” “sex with data,” “blasting versus touching,” and “welcome to media purgatory.”

Though working in the digital marketing world the author champions the importance of books. All seeking to make their way through the purgatory of the modern media mash up can benefit from figuratively hitting Ctrl Alt Delete after reading this book.