Cthulhu: The Ancient One Tribute Box 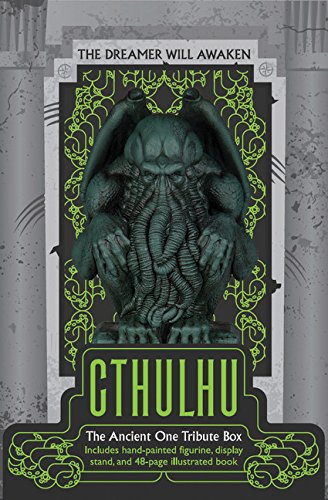 “in his house at R’lyeh dead Cthulhu waits dreaming . . .“

Cthulhu is the best-known and most remembered of the Lovecraft Mythos pantheon of Elder Gods, those “Great Old Ones” who once ruled Earth, but have—for the time being—been exiled to a point past the fartherest star.

“. . . in his house at R’lyeh dead Cthulhu waits dreaming . . .“ and when a specific alignment of stars and planets occurs, he will awaken and open the way for the Old Ones to return.

Cthulhu is those stories’ most popular figure and has come to represent the dark tales written by H. P. Lovecraft.  Defined today as “horror” stories, but originally considered “weird fiction,” Lovecraft’s writing adheres more to the mode of literature in which suggestion and nuance, impression, atmosphere, and the characters’ states of mind are most important. As the author himself defended his choice of genre in his 1933 essay “On Writing Weird Fiction,”

“I choose weird stories because they . . . achieve the illusion of the strange suspension of time, space, and natural law which forever imprison us and frustrate our curiosity . . .”

In the creation of Cthulhu—great priest of the Elder Gods, with the power to drive men mad through their dreams—Lovecraft definitely succeeded. In the past 88 years, with his first appearance in the February 1928 issue of Weird Tales, the creature has made a niche for himself in readers’ imaginations. Cthulhu is always part of other stories in Lovecraft’s universe, and if he doesn’t have a starring role, he nevertheless hovers in the background, a menacing off-stage presence still able to drive other characters insane merely by his existence.

In this very short volume—only 44 pages—is assembled a concise history of Cthulhu, along with the many authors whom he and his creator have influenced:  from Robert Bloch to Stephen King.

Also featured are full-page artworks showing various artists’ conceptions taken from Lovecraft’s deliberately vague description, each adding his own interpretation to the mix, for what better way to make something completely terrifying than not to go into detail?

“The Thing cannot be described . . . if my imagination yielded simultaneous pictures of an octopus, a dragon,  and a human caricature,  I shall not be unfaithful to the spirit of the thing . . .”

Cthulhu has been parodied, copied, featured in other authors’ novels, faithfully rendered in drawing, literature, movies, and other entertainment media. Among those citing inspiration are Mike Mignola, creator of the supernatural comic series Hellboy, the rock group Metallica, several role-playing and gaming companies, and even the London bookseller, Waterstone, who tweets:

“The Great Cthulhu crawled from the walls, customers ran, we searched frantically for the Head Office Elder Gods helpline . . .”

There is Cthulhu knitted winter wear and Internet memes and, of course, the sculpture accompanying this booklet, specifically designed to “encourage imaginative breaks from the routine and free thinking from the everyday.”

The booklet carries a great deal of facts and information in a small space. The sculpture, “suitable for fear, worship, or dark contemplation,” sits (or crouches) in an ornately designed box also housing the booklet. It also comes with a stand for display on bookshelf or mantel. It’s a suitable gift for horror authors but would no doubt also be a welcome presentation for the weird tales devotee as well.

All in all, this little set is a tribute to one writer’s imagination, driving home the fact that a man’s accomplishments may long survive himself.