Crusader: General Donn Starry and the Army of His Times 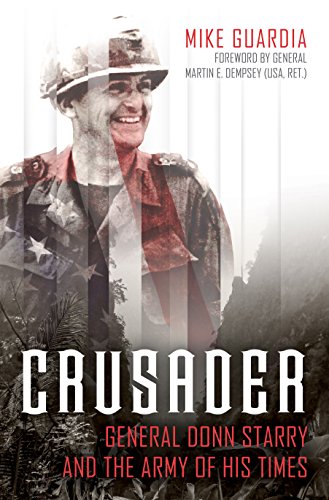 “leaves behind a legacy as one of the Army’s most influential innovators . . .”

Donn Starry is one of the important Army generals of the last 50 years, yet his name is virtually unknown to most Americans. Serving a career that spanned practically the entire Cold War, he had an enormous influence on rebuilding the U.S. Army after Vietnam and laying the foundation for the Army’s post-Vietnam AirLand Battle doctrine that proved decisive in routing the Iraqi Army in Operation Desert Storm.

This short and fast-paced book highlights the career of a remarkable officer and soldier’s soldier, from the post-World War II occupation of Germany, to his tours in Vietnam, to his efforts to restructure the Army to defend Western Europe in the 1980s.

Along the way Starry had the opportunity to serve with many noteworthy officers, including Creighton Abrams, George S Patton Jr, and William E. DePuy—all of whom took an interest in the young armor officer and provided mentoring and professional help at critical junctures in his career.

Starry became an armor officer in an ironic turn of events early in his career and became a strong advocate for armored and maneuver warfare, even in operational and tactical situations where the employment of heavy forces seemed counter-intuitive.

During an early tour in Vietnam, Starry was part of an operational study group that tried to persuade a reluctant chain-of-command that armored and mechanized units could operate successfully in the jungles, swamps, and forests of the South Vietnamese country side.

Starry was convinced that the mobility and firepower of mechanized units provided a viable tactical and operational alternative to the normal maneuver of using helicopters to provide battlefield mobility for light infantry, but at the cost of the persistent staying power heavy units could provide.

He was able to put these ideas into practice when he took command of the 11th Armored Cavalry Regiment, which he led during the joint American-South Vietnamese invasion of Cambodia in 1970.

Then Colonel Starry led his regiment as the spearhead of the attack into the border region known as the “Fishhook” a huge logistical complex supporting North Vietnamese forces in the south. In several weeks of heavy combat, Colonel Starry proved that a heavily armored force could not only operate in the tough terrain, but provide a sustained presence needed to capture and occupy crucial objectives. Seriously wounded during the operation, he astounded doctors by returning to his regiment in only a few weeks, desiring to be back with his men in the field.

Returning home as the war wound down, newly promoted Brigadier General Starry watched as the mixture of an unpopular war and the end of the draft caused the near disintegration of morale and discipline in the Army in the late 1970s.

The general anti-military mood of the country and Congress led to what would be known as the “hollowed out” force, where race riots, drug abuse, and the general drawdown of forces rippled through Army barracks around the world.

Starry was a key player in bringing the Army through its post-Vietnam nadir, helping shape initial volunteer force manpower policy, and personally improving conditions for soldiers and their families when he commanded the Army’s Armor training center at Fort Knox, Kentucky.

His final contribution to the Army was as commander of the Training and Doctrine Command, formed after Vietnam to refocus the Army away from counter-insurgency and back to the defense of Western Europe against an increasingly capable and aggressive Soviet Union. While at this command, Starry began incorporating the lessons of the 1973 Yom Kippur War, fought between Soviet equipped and trained Egyptian and Syrian forces and more Western oriented Israeli forces.

Like most military officers who studied this conflict, Starry was stunned at the intensity of the combat, resulting in heavy casualties in tanks and aircraft along with a tremendous consumption of supplies and ammunition during the first few days of combat.

As a result of these lessons learned, in the mid-1980s Starry and his Air Force counterparts forged the first truly integrated battle doctrine for the U.S. military, Field Manual (FM) 100, dubbed AirLand Battle, that provided for a joint action plan between the Army and Air Force to fight and defeat superior numbers of Soviet armored units in a potential defense of Western Europe. As an institutional document and process, this was a truly ground-breaking moment for both the Army and the US military as a whole and its effects are still being felt today.

Starry retired from the Army as a four-star general in 1983 as the Army continued to rise from the ashes of Vietnam and become the highly trained and well-equipped professional force that decimated the Iraqi Army in 100 hours of combat in Operation Desert Storm, using most of the principles of AirLand Battle to overwhelm the Iraqi forces with maneuver and air power.

General Donn Starry died of cancer in 2011 and leaves behind a legacy as not only one of the Army’s most influential innovators of armored and maneuver warfare, but a key figure in its rebirth after the Vietnam debacle into a professional fighting force.