Cruising Through the Louvre (Louvre Collection) 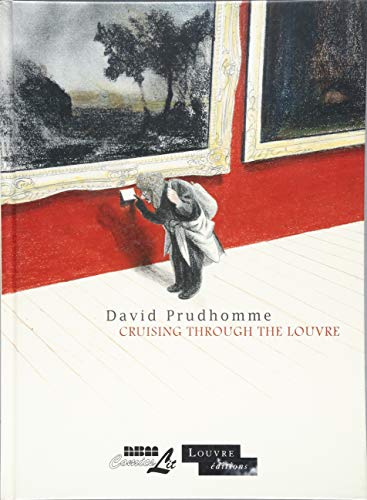 “a gorgeous, playful artwork in and of itself about art, creating art, order, and randomness.”

David Prudhomme’s wonderful new work, Cruising Through the Louvre is hard to categorize. It is sort of a graphic novel but not a novel; it’s kind of a comic book but far more sophisticated; it is a work of art, criticism, philosophy; it is beautiful and delightful.

In Cruising Through the Louvre Prudhomme takes on the role of a flaneur observing the people, art, and himself while wandering through the Louvre museum fielding phone calls and trying to meet up with Jeanne.

Cruising Through the Louvre opens with the author/illustrator standing in front of a Rembrandt self-portrait in the Louvre talking on the phone about his progress with his book, namely this one. He tells his editor: “It’s like I’m walking inside a giant comic book.” And so he sees the Louvre with its panels of artworks and lines and clusters of people as a giant comic book. His own work too is comprised of panels and speech bubbles that depict the art works of and visitors to the Louvre.

Prudhomme’s work is both self-conscious and a social critique. It is about the creation of this book as well as the artworks, the role of art, and people that fill his work. The first panels depict Prudhomme talking on his cell phone or self phone, standing before a Rembrandt self-portrait. He, like Rembrandt, is wearing a white hat and dark coat. Throughout Cruising Through the Louvre Prudhomme portrays visitors talking on their phones, taking photos of the art works and themselves posing near the art with their phones and cameras, and taking selfies, and thus makes interesting observations about our relationship to art and our need for permanence and order.

Cruising Through the Louvre is also clever and funny. Prudhomme creates numerous comical scenes of life imitating art just as the art works depict life. Along with his magnificent reproductions of many famous art works in the Louvre, Prudhomme draws spectators interacting with or mirroring the art works. For instance, in his portrait of Delacroix’s “Raft of the Medussa” the museum visitors sitting on a bench in front of the painting appear to be struggling on or falling off the raft along with characters in the painting.

Also, there is a wonderful panel of a Madonna and child surrounded by angels, which is mirrored by a teacher enveloped by students who sit beneath the painting. Prudhomme shows kissing couples next to pairs of statues and museum goers who look like the art works they are viewing.

Not only does Prudhomme do an outstanding job of reproducing in his pencil drawings some of the works in the Louvre’s collection, but he also creates his own fine art works. In one particularly striking panel, he portrays a glimpse of a young woman through a doorway as she sits on a bench thinking or looking at a painting. His vantage point specifically of an interior and use of light are reminiscent of those of Bonnard or Vermeer.

Toward the end of Cruising Through the Louvre, Prudhomme creates panels of headless bodies, disembodied heads, random body parts, combined figures, and museum visitors’ heads indistinguishable from the portraits behind them. These panels suggest, as Prudhomme observes, that the Louvre is “a palace of beautiful randomness” and “a headspinner.” Cruising Through the Louvre captures the seemingly random, headspinning, chaos and order, and magnificence of the Louvre.

In observing people photographing art works, Prudhomme notes: “We try to hold onto what cannot belong to us.” This is very much what Cruising Through the Louvre does. It is a gorgeous, playful artwork in and of itself about art, creating art, order, and randomness.