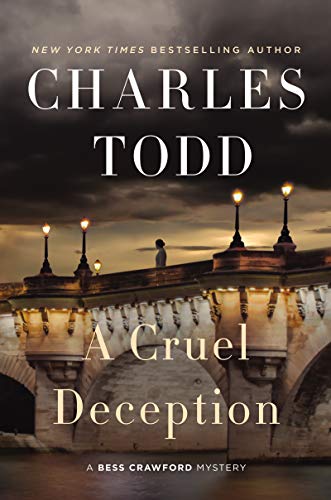 “As with all other Bess Crawford mysteries, this one is historically accurate, entertainingly written, and thoroughly enjoyable.”

The War to End All Wars is over, and nurse Bess Crawford is back home in England, not ready to face the decision of what to do as she returns to civilian life.

“I really hadn’t thought about my own future. I’ve been too busy with the wounded who hadn’t gone home at war’s end.”

That question is temporarily answered for her when she receives a request from the Chief of Nursing.

“My son is in Paris for the peace talks and I’m worried about him. He was wounded last October and he hasn’t really been well since. A friend recently returned from Paris informed me he’d not been in attendance at any of the meetings.”

Since the lieutenant is still in the Army, if Matron Minton inquires through official channels about her son, it may jeopardize his career, so she asks Bess to return to France and “find him, asses his condition, and report to me.”

There’s one other problem—Lawrence Minton has a drug dependency from the medications he received when wounded.

What can Bess do but agree?

Returning to Paris, she meets some fellow officers who are only too glad to help out. One is Captain Barkley, an American Bess’ father asked to keep an eye on her on a previous adventure, and Captain Jackson, a member of the Lafayette Escadrille. Managing to elude their assistance, Bess discovers Lawrence Minton is missing from the boarding house where he has a room.

Marina Lascelle, a teacher whose family is friends with Lawrence Minton, has taken him to her home in St. Ives. Bess seeks her out.

“As we climbed the stairs, I asked, “Why is the Lieutenant here and not in his flat in Paris?”

“I was afraid,” she said. “His illness was beginning to cause talk. I thought it best—I didn’t know what else to do.”

Marina is grateful for Bess’ assistance but Minton is not. He’s rude, ill-tempered and keeps himself locked in his room for most of her visit.

The only time he emerges is to have a fist fight with someone who brings him a vial of opium. After taking it, Lawrence becomes ill, and Bess discovers the drug was poisoned. His second foray from his room is a bout of sleepwalking in which Bess see him struggling with an unseen antagonist.

“He went on staring at me. I stayed where I was watching his face.

I didn’t think he was speaking to me.

Falling to his knees, he began to cry, wracking sobs. I had seldom seen a man cry as he had. Whatever was on his mind, he carried a burden almost too heavy to bear.”

Did Lawrence kill someone while in a drug-induced stupor? Or is someone trying to kill him? How does his previous war record fit into the story?

Marina says his personality changed within the course of a single night.

“He never told you what happened? Or tried to account for the change?”

“Before, we talked easily. Now, he won’t speak, won’t eat, won’t tell me anything. So I stopped asking.”

When Lawrence disappears, Bess believes he’s gone to Paris, intending to kill himself. She follows, determined to save his life and discover once and for all the secret changing a decorated war hero from someone with a bright future into a haunted shell believing self-destruction is the only escape.

A Cruel Deception is an apt title for this novel, because the search and events leading up to the discovery of Lawrence’s secret are so dramatic and detailed that when the cause is finally revealed, it seems almost anticlimactic.

This doesn’t mean the story is a weak one, however. The worries of a post-war world are authentically depicted. The Paris Bess visits is still in the throes of the deprivations of that war. Food is scarce, families have been decimated, and destruction is still very evident.

Bess is confident she’s able to take care of herself in this environment, but this was indeed a time and place that could be dangerous for a lone young woman, and she finds herself in several situations where the presence of another person saves her from injury, if not death.

Blending the search for Lawrence Minton into the background of the Peace Talks, and the beginning of the opioid dependency epidemic which is even more with us to this day, gives the story a contemporary immediacy.

As with all other Bess Crawford mysteries, this one is historically accurate, entertainingly written, and thoroughly enjoyable.