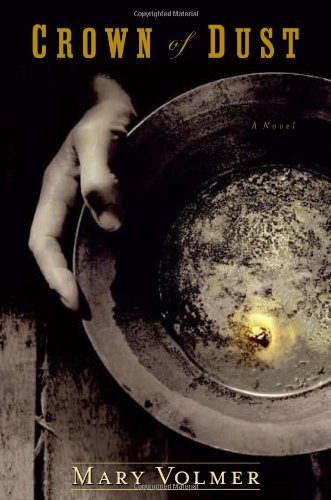 Motherlode, the fictional dusty California gold-rush town whose evolution Mary Volmer portrays so charmingly in her debut novel, is a character of its own—a gawky preteen of a sort, a formerly happy child who sprouts up unexpectedly, grows sullen in its gangly adolescence, and then under the influence of fresh faces, determinedly ignores its embarrassing parents.

The “mother” of Motherlode would be Emaline—a big-boned widow who’s run from trouble in order to set up shop far enough from civilization as to be considered out of reach. She’s also the first of many of Volmer’s well-rounded characters, built to type but honed to distinct individuality. Emaline builds the first church and runs the saloon, dreaming of mahogany nightstands and upholstered settees and maybe even running water, all the trappings of permanence. She provides food, shelter, and comfort to the collection of first-line gold-rush adventurers working the local river.

She also becomes a mother figure to a slight, quiet young man who wanders into town sporting a gold pan, a few coins, and wearing somebody else’s boots. Alex—the young man—is actually a psychologically battered woman running from an infamous crime. Her determination to remain unnoticed ends the day she finds an egg-sized lump of gold. She becomes the Golden Boy, the town mascot.

After this wonderful—and dreadful—discovery, the fate of the town and her frisky collection of oddballs unfurls with terrible precision. Successive waves of adventurers show up in the valley. Lawyers move in, to handle claims. Their wives walk the dusty street in the splendor of multiple petticoats. It’s a toss-up as to which will devastate the burgeoning town first: The coming of hydraulic methods of mining, the coming of the law, or the coming of the corseted brigade.

For what the original denizens of Motherlode come to learn—and what Mary Volmer has so brilliantly portrayed in this gritty yet wistful story—is that by achieving the dream they’d set out to find, they’d also planted the seeds of their own destruction. Thus Crown of Dust is a lovely paean to all the little towns born during the California Gold Rush, and an emotional elegy to the forgotten souls who worked, loved, and died in such places.

Volmer leaves us, in the end, with a haunting dilemma: What will happen to this whole breed of fortune hunters when there are no more fortunes to chase, and no more frontiers to explore?