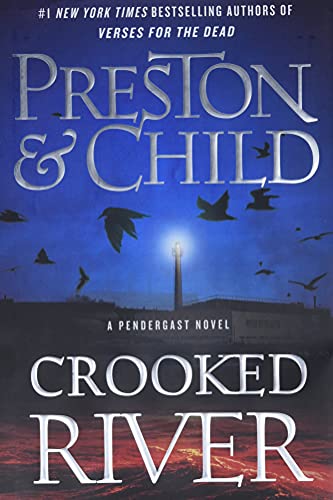 “From the idyllic beaches of Sinabel Island to the climax in an abandoned sugar plant housing illegal experiments, Crooked River is another great entry in this series.”

Sanibel Island, off the southwestern coast of Florida, has some of the best seashells in the world. Storms from the Gulf of Mexico bring shells rolling onto its beaches for tourists to claim.

The things being washed up on Sanibel’s shores this sunny afternoon aren’t shells, however, but shoes—over a hundred pairs of canvas shoes.

“Just then his eye caught a flash of green directly ahead, a shade lighter than the turquoise water. Then he saw it again, half-submerged about six feet from the shore. It wasn’t a shell at all but a sneaker. A brand-new, light green sneaker.“

That isn’t the most horrific thing, however. Each shoe holds a human foot.

Chopped off at the ankle.

It doesn’t take long for local law enforcement to call in the FBI.

After the solving of his latest case, Agent Pendergast and his ward, Constance Greene, are relaxing at Plantation Key when Assistant Director in Charge Pickett drops in via helicopter with news of what’s happening at Sanibel.

Pendergast is more interested in this long-deserved respite from odd but interesting cases, however.

“This has all the makings of an exceedingly unusual and difficult case. I think your experience would be useful.”

”Under normal circumstances, perhaps. But Constance and I have not completed our holiday.”

Pickett was thinking. He had a feeling this case was so bizarre that Pendergast would be by far the best tool in his belt. This bantering refusal bordered on insubordination.”

It takes a lot more cajoling and a few verbal bribes to get Pendergast in the ’copter and on his way.

While Constance entertains herself investigating the haunting of a local mansion whose owner was believed murdered though a body was found, Pendergast begins his investigation.

Unknown to the agent, an acquaintance from the past, Roger Smithback, dogged freelance reporter, also happens to be at Sanibel when the shoes wash ashore. He’s prevented from taking photos, but when he learns Pendergast is on the case, he knows this will be a scoop—if he’s able to write it.

Smithback has never let a little thing like excluding the press from a crime scene stop him, and he won’t this time, either.

When DNA testing discovers a match through a commercial geneaology database, Pendergast’s partner, Agent Coldmoon is called away from his own vacation and sent to Guatemala to find the victim’s family and trace her journey to Florida.

A meeting with Dr. Pamela Gladstone, whose studies on ocean currents from the Gulf put her at odds with the theories espoused by the Coast Guard, sends both the doctor and Pendergast on a collision course with those responsible for the crime.

In a violent confrontation in a Florida swamp “fetid with the smell of rotting wood and swamp gas,” Pendergast and Pamela get a close-up and personal view of what caused over a hundred people to amputate their own feet. Now all they have to do is survive long enough to warn the authorities.

As with all Agent Pendergast novels, this one is fast moving and definitely tense with plenty of the agent’s dry and well-thought out Southern phraseology and a bizarre but intriguing crime. There is a plethora of characters, villainous, heroic, or simply ordinary people caught up in something they don’t understand, all given the spotlight long enough to make the reader care.

There’s a political element, of course. Where would our thrillers be without that factor? But mainly this is a story of the most misguided of patriotic intentions, as well as a good argument for the banning of bioweapons.

In this one, Pendergast needs a “little help from his friends,” and they come to his aid en masse, as true comrades will.

From the idyllic beaches of Sinabel Island to the climax in an abandoned sugar plant housing illegal experiments, Crooked River is another great entry in this series.

Preston and Child keep them coming, don’t they?