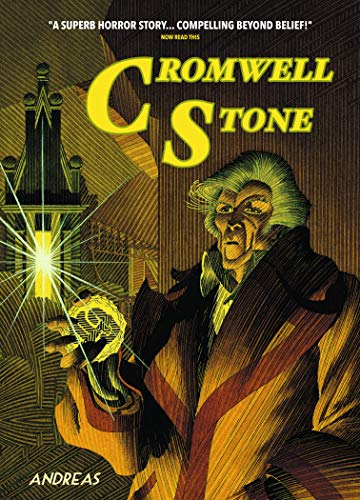 “This graphic novel spreads madness for it gives readers a glimpse at the divine.”

In the world of Lovecraftian horror, the true terror does not come from the monsters lurking between worlds. It is not the nameless cults performing blasphemous rites in the Louisiana bayou. It isn’t even the legend-haunted and witch-haunted streets of Arkham. Rather, it is the knowledge that we are alone in a universe that neither hates us nor loves us. It could not care less about us and all our endeavors. No life matters.

Cromwell Stone, which was originally created in the late 1980s and published in a series of volumes throughout the 1990s, captures this cosmic dread in stark black and white. The central story of Cromwell Stone is not important. For most readers it will not even be intelligible. Suffice it to say that Andreas’ reissued graphic novel tells the complex story of humans, superhumans, and wreckers.

The titular character is one of the last survivors of the doomed ship Leviticus, and he comes ashore in the United States with an occult key. This key is sought after by a horde of demons (superhumans) wearing human skin. These entities disrupt normal life (hence, “wreckers”) in order to keep man from accessing the hidden truth. Ultimately, Stone's key and its mystery is entrusted into the hands of amnesiac woman named Marlene Parthington. She may or may not be an ageless woman of a blasted Scottish moor.

The narrative complexity of Cromwell Stone is mirrored by its dizzying artwork. Andreas seems like a psychotic M. C. Escher, with traditional cartoon lines sacrificed to non-Euclidean shapes and angles. Surrealism is not a strong enough word to describe Andreas’s work—Cromwell Stone looks even more unhinged than its events. All of this is on purpose of course, as the apex of the story reminds us that humans “cannot see God and live.” This graphic novel spreads madness for it gives readers a glimpse at the divine.

Cromwell Stone is a wonderful edition to the Lovecraftian canon. Now, in its English language translation, readers can enjoy Andreas’s unique style. While this volume can legitimately be characterized as style over substance, it cannot be accused of forgetting the feelings of doom and dread that are de rigueur for the horror tale. There is something evil and unknowable lurking behind the pages of Cromwell Stone. If you are brave enough to try and uncover the monsters, then you will be rewarded with an amazing idiosyncrasy from one of the world’s best comics creators.