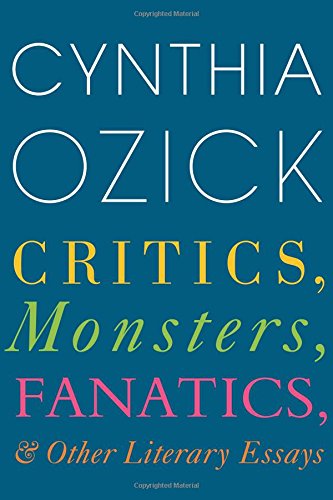 “I’d intended to provoke; what I got instead was sixty reviews in a vacuum.” Jonathan Franzen said this after penning a little-known manifesto, before he published The Corrections, spurned Oprah’s book club, and got into a high-profile slap fight with Jonathan Safran Foer. The Franzer-Foer spat was over the general decline in readership in America. Thus begins Cynthia Ozick’s lacerating essay “The Boys in the Alley, the Disappearing Readers, and the Novel’s Ghostly Twin.”

Originally published in Harper’s Magazine, this and others are collected in Critics, Monsters, Fanatics, and Other Literary Essays. Ozick’s essays originated in places like the New York Times Book Review, the New Republic, PEN Magazine, the Paris Review Online, Standpoint (UK), and Harper’s. Now 88, she represents a long-vanished age of literary criticism.

Yet she also represents an enthusiast of literature at once opinionated, hyper-erudite, and metropolitan. Ozick’s collection of literary essays yearns for a more educated literary atmosphere yet can’t shake the inevitable melancholic nostalgia from permeating the very essence of this book. Her longevity in the field makes her a titan, yet too much nostalgia can become poisonous.

Critics, Monsters, Fanatics asserts two major themes throughout the work. The first is the desire for a restoration of an erudite, long-form literary essay as a popular media form. Ozick laments the rise of the Internet reviewer, especially the unsophisticated hordes writing reviews on Amazon.com. She lauds Lionel Trilling and Edmund Wilson as heroic exemplars of the craft. The other theme shot through the entire collection is Ozick’s pride in her Jewish-American heritage.

Her Jewishness becomes a lens through which she deconstructs the word Kafkaesque in her lengthy essay on Reiner Stach’s multi-volume biography of Franz Kafka. “A scrupulous and capacious biography may own the power to drive away these belittlements, and Reiner Stach’s mammoth three volumes (only the second and third have appeared in English so far) are superbly tempered for exorcism.”

Like the critic James Wood, Ozick takes her time in scene-setting. She spends much space summarizing Kafka’s biography, interweaving her critiques of Stach’s biography, and her own Jewishness. For those unable to read Stach’s monumental work, this is the second best thing. Essays on Saul Bellow, Bernard Malamud, Harold Bloom, and Martin Amis revolve around the issues of Jewish-American literature, the Jewish language, and the literature of the Holocaust.

In the essay “Nobility Eclipsed,” she reviews Sanctuary in the Wilderness: A Critical Introduction to American Hebrew Poetry, edited by Alan Mintz. She begins the essay recreating a discussion between Marilynne Robinson and Robert Alter at the 92nd Street Y on December 17, 2007. The discussion pivoted on the question of who owns the Hebrew language. This evolves into Ozick’s take on Mintz’s poetry collection. She describes Sanctuary as “history, biography, translation, criticism, and more—a “more” that is, after all, an evocation of regret.” In her review, she dwells on the figure of Abraham Regelson. She confesses her focus on him is because her was her uncle. Yet she justifies this nepotistic bias by illustrating its advantage. “[Y]et consanguinity’s advantage is ready access to buried knowledge—or call it cosmic melodrama, or the self-preening misadventures of a pair of contenders.” The hidden treasure trove of personal knowledge is akin to a tourist asking a local about the best places to eat versus relying on a guidebook. Ozick turns an otherwise topical review (due to her ethnic background) into a personal recollection of real people.

Ozick exists as a treasured elder, stubbornly holding on to the ideas and personalities that matter in this increasingly over-stimulated and hyper-mediated age. With the passing of John Updike, she stands as a distaff representative of the postwar literary luminaries. Like Updike, Anthony Burgess, and Vladimir Nabokov, she writes reviews with lush prose, each essay a stimulant to those seeking the beautiful interplay of ideas, language, and strong opinions. The only real detraction from these otherwise magisterial essays is her nagging skepticism about the Internet and other new media.

Despite her clarion call for an erudite critical community and an equally well-read general readership, Ozick also needs reminding that this isn’t 1962. Beyond the literary landscape and the death of the midlist author, the publishing landscape has radically changed. Random House isn’t the cagey independent publishing house, but a much larger corporation, itself only a minor star in the vast multinational conglomerate that oversees it.

But the Internet is also not a horde of uncouth philistines giving one-star reviews on Amazon (election 2016 notwithstanding), since it has yielded dependable venues for erudite, informed, and engaging literary criticism. Ozick’s collection offers wonderful prose and intellectual illumination with the literature of its day. She hard-peddles the nostalgia a bit too much at times, but it doesn’t undercut the value of these essays. They provoke reflection, argument, and engagement with the texts she investigates.