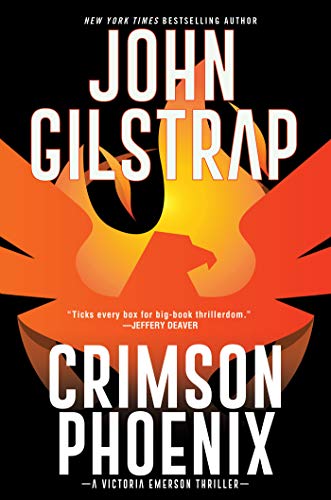 An echo of Stephen King’s The Stand. A flash of James Dickey’s Deliverance. Stir in a moment or two, when the plot is ripe for it, of Shirley Jackson’s short story “The Lottery” and immerse readers in a post-apocalyptic world where a nuclear holocaust has left authority and justice up for grabs both on the global stage and among random strangers in the dark woods.

John Gilstrap’s Crimson Phoenix is sprawling and ambitious, like a big messy movie you can’t stop watching. At the end, you might think the current pandemic was the equivalent of mild collective scratchy throat compared to what the central characters are grappling with in this free-for-all land of bleakness.

Yes, billions die in Crimson Phoenix—the vast majority off-screen. But millions are alive, and if Al Haig were among them he’d rush to the middle of this plot and claim control, because the president and vice-president are both goners, and the entire U.S. Congress has been ushered to a giant undisclosed bunker to squabble over who is in charge and what’s next. Why didn’t the White House separate the POTUS and VPOTUS before the annihilation? That’s a basic rule of pending nuclear war, right? Oh well, the conceit makes for good political theater once the horde is sequestered.

The giant dark holding tank where the entire US Congress is sheltered—each elected representative is allowed one staff member, too—is based on the real-life U.S. Government Relocation Facility located at the Greenbrier Resort in White Sulphur Springs, West Virginia. (A facility decommissioned after journalists discovered it in the early 1990s.)

One congresswoman refuses to huddle with her colleagues. She is Victoria Emerson, U.S. representative for West Virginia’s Third Congressional District. She is informed on page one that “Crimson Phoenix” is “active.” The two words are code for Big Trouble. DEFCON 1, etcetera.

Son Caleb needs to be told that “this is not a drill.” Another son, Adam, is not at home when Rep. Emerson is whisked away in a black Suburban by a Major Joseph McCrea, who will play a big role in the unfolding events ahead. We are given a rough overview of what led up to the nuclear devastation—Israel, Iran, Russia. Blah, blah. Not the point.

When we meet Rep. Emerson’s son Adam, it’s a postcoital moment in a tent in the West Virginia mountains. He is with just-turned-eighteen girlfriend Emily. (Adam and Emma . . . maybe a bit too on the nose?)

“Adam was struggling to kick his way out of the sleeping bag when the pressure wave hit. The boom had the same quality of those bright bursting charges during fireworks displays, but instead of that single pulse of noise, the boom kept rolling. The mountain shook and surrounding trees swayed . . . [Adam] was dimly aware that the air smelled bad. It had a chemical quality to it, unlike anything he’d smelled before. It smelled hot. It smelled awful.”

Apparently their camping spot is just enough outside the radiation zone. Soon, Adam is giving Emily lessons in mental fortitude. Crimson Phoenix bounces with abandon from the bunker to the survivalists, who grapple with the moral dilemma of whether it’s okay to shoot to kill or if the old ways of civilized society—including the concept of a fair trial—are still a thing. Soon, Rep. Emerson is meting out justice in a way she likely never imagined. And

Gilstrap piles jeopardy on top of jeopardy. The breezy writing is built for speed. This is not the heavy literary gravitas of Cormac McCarthy’s The Road; Crimson Phoenix has a movie-of-the-week flair.

In his author’s note, Gilstrap said that in his youth he was fascinated with Neville Shute’s On the Beach and Pat Frank’s Alas, Babylon. Gilstrap asserts those books are “much darker.” When it comes choosing one nuclear holocaust over another, how does one know?

One thing for sure—Crimson Phoenix is A Victoria Emerson Thriller. We are not done with this story. From where the story leaves her, in fact, it sure looks like a long way back. And lots to rebuild.