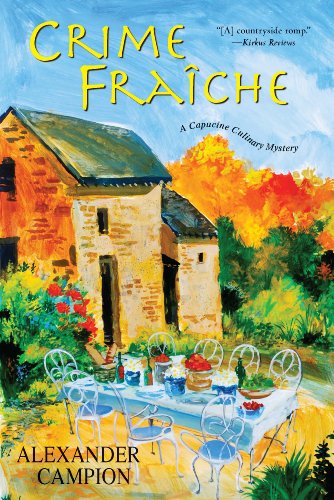 “If he would just inject a little humor and poke a little fun at the French, Mr. Campion’s Capucine Culinary Mystery Series just might develop a following, but in the meantime, Crime Fraîche feels like a dish with a key ingredient missing.”

At the intersection where foodies who love mysteries and mystery readers who love food meet, Alexander Campion has dished up the second in the Capucine Culinary Mystery series.

Set in Paris and Normandy, Crime Fraîche follows the chic Parisian detective, Capucine LeTellier, who has chosen to eschew her privileged upper middle class background to work in the crime division of Paris’s dicey 20th arrondissement. When she decides to attend a weekend pheasant hunt at her uncle’s chateau in Normandy, she quickly gets sucked into a local mystery revolving around a series of suspicious hunting accidents.

While an improvement over Mr. Campion’s first novel in the series, The Grave Gourmet (Kensington Books 2010), Crime Fraîche seems to suffer from trying to be too much at once, like an eager chef who ruins a dish by making it too complicated.

First, there are two separate crimes to be solved: one involving a young female con artist in Paris which keeps Capucine’s team of detectives occupied in Paris while she tries to sort out the rash of hunting accidents in Normandy. The two have nothing to do with one another and only serve to keep the Paris detective team introduced in the first book fresh in the reader’s mind. As a result, Capucine is constantly running back and forth to Paris to check up on the team while the main story is put on hold.

Then there are the constant interruptions while Capucine sits down to a meal described in great detail whether in the latest trendy restaurant in Paris with her husband who is twenty years her senior and is a highly acclaimed restaurant critic named Alexandre (wink, wink), a local dive in Normandy or at a sumptuous meal at her uncle’s chateau where game birds are presented in all manner of variations.

You will also get a thoroughgoing lesson on collecting wild mushrooms, cheese making, and Calvados, all of which is interesting stuff, but does nothing to advance the plot.

And plot is what keeps us turning the pages. Not to mention quirky characters. The best crime stories have detectives who are winningly eccentric in some way. Think Agatha Christie’s Miss Marple, Alexander McCall Smith’s Precious Mambotswe, or even Stieg Larsson’s Lisbeth Salander who is so damaged and outré that we end up caring about her.

Capucine LeTellier, on the other hand, is a one-dimensional character whose penchant for Italian designer shoes and the occasional Chanel suit puts her at odds with the gritty world of a crime sleuthing. She often seems wooden, cold, and unconvincing as a rising star in the Police Judiciare. Her colleagues are no more intriguing, and her husband, Alexandre, seems to be a bit of a high maintenance sort whose sole interest in life is his next meal/drink, which admittedly serves to enhance the culinary side of the book, but little else.

Then there is Jacques, Capucine’s lecherous cousin who works for the French equivalent of the CIA. His obnoxious sexual harassment and adolescent pranks towards Capucine might strain belief had the antics of Dominique Strauss-Kahn (the French presidential hopeful and former head of the IMF) not surfaced in early 2011. In one scene Jacques unclasps Capucine’s bra on the way into dinner at her uncle’s chateau:

“At first she thought he was feeling around for her weapon, and then, too late, she remembered their childhood. In a very well practiced gesture he pinched open the clasp of her brassiere, letting her heavy breasts fall free. . . . ‘It’s the animal lover in me,’ he whispered in her ear. ‘I hate to see such lovely bouncy bunnies caged up.’”

An expat who has lived in Paris for 35 years and is married to a French woman, Mr. Campion has all the inside knowledge to reveal the French as they really are, yet he somehow misses the mark.

The dialogue often reads like subtitles in a French film—stilted and unnatural. Other times, Mr. Campion uses French and then translates. (Is he giving us a French lesson or writing a murder mystery—or just showing off?)

Mr. Campion has clearly intended this series for an American audience and he somehow feels compelled to give us advice on French etiquette (never “force a captive group of people into a social commitment”), while at others he stops to explain something particularly unique to Paris or France making the narrative seem self-conscious. In describing a recent sighting of the con artist they are trying to capture in Paris, Isabelle, a member of Capucine’s detective team reports, “she did her fainting routine just at the end of the market, you know, where they have one of those new municipal bicycle stands, the kind where you rent the bicycle for the day and turn it in anywhere you want.” It’s not likely her colleagues don’t know how the municipal bikes work in Paris.

If he would just inject a little humor and poke a little fun at the French, Mr. Campion’s Capucine Culinary Mystery Series just might develop a following, but in the meantime, Crime Fraîche feels like a dish with a key ingredient missing.