Crime Does Not Pay: Volume III 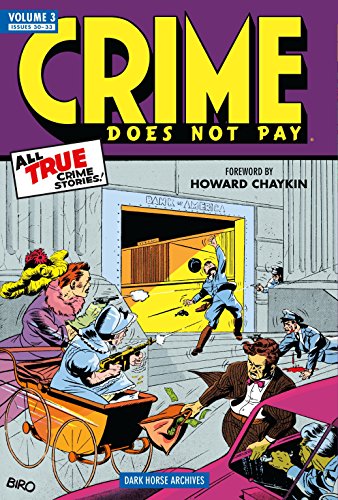 Considered by many the first real crime comic when it first arrived in 1942, Crime Doesn’t Pay still has the ability to shock readers. Dark Horse Books has just released the third volume in the Dark Horse Archives Crime Does Not Pay series. Containing issues 30–33 of the title, the book is a feast for those who love not only crime comics, but also the genre of crime fiction.

What attracted so many readers to the title during its peak in the forties is the very same thing that makes such television shows such as “C.S.I.,” “Law and Order,” and “Hawaii Five-0” so popular today: People love to hear and read and watch crime.

The public’s fascination with crime will always be there and comic and magazine publisher Lev Gleason knew this. And he also needed to sell some comics in order to stay in business.

By 1942 Gleason had done his best to compete with other comic book publishers. His company was foundering. Gleason just didn’t have the heroes or content that DC, Dell, or Timely (as Marvel was called at the time) did. With others in the field dominating sales with Superhero fantasies, adventure, and funny animals, he and Editor Bob Wood (and artist Charles Biro) decided to move in a completely different direction.

With Crime Does Not Pay Lev Gleason gave readers pure shock and awe combined with blood and gore—even artistically presented here and there.

While the content was terribly violent and flat-out crazy for the time, Gleason and his editors got around this by making sure that each story was tied up at the end with a very moralistic message: Crime Does Not Pay!

If he had to show the readers such disturbing images as women being attacked or tied up, children being placed in danger, bullets flying like a thirties Warner Brothers gangster movie, or knives being forcefully thrust into a hapless victim’s chest, well . . . so be it.

According to Gleason, the purpose of the title was to make sure that the readers knew that Crime Does Not Pay! No matter how insane the action became, the reader knew that, in the end, all crime had repercussions! No matter how violent the story was, the ending was never morally ambiguous about this.

Gleason and his editor gave the title a mascot, an ugly, thin, tall goon with an Abe Lincoln Top Hat and jailbird teeth that bore the word “crime” across the front. This was Mr. Crime. He was the reader’s guide through the world of crime and human mistakes.

Anchoring the book with a character who would show up every issue not only establishing an identifiable continuity for the reader, (always a plus in comic publishing) but it also helped sell Gleason’s idea that the stories were being created for a “moral” reason.

Several of the stories in this collection highlight art from Carmine Infantino, Dick Woods, Jack Cole, and Richard Briefer. Cole is one of the greats who had an imaginative run at Quality Comics and also created Plastic Man. Infantino would go onto to stylize the Silver Age Flash and become an important editor at DC in the sixties.

However, the title is notoriously inconsistent when it came to the quality of the art. Oddly enough this doesn’t diminish the reader’s joy with the material in any way.

One reason that the title could get away with the extreme violence was that Gleason also used artists who were almost “cartoony” in the extreme. As sensationalistic as the action was, the violence at the heart of each story almost always seemed diminished by the roundness of the figures, the near-comedic exaggeration of facial gestures and the distortion of the surroundings.
One artist stands out above the others for his work on the title.

The cover of each issue reprinted in this edition was created by Charles Biro. He knew how to create the most sensationalistic work possible while still keeping the book clean enough to make it on the newsstands of the day.

The cover to issue #33 is just downright freaky. A crazed greaser with googly eyes is holding a woman by her throat. In his other hand he holds a raised axe with the blade shining in the moonlight. The scene is so nutso that it takes a second until you realize that behind all of this there are also five bodies hanging by their necks on a cross!

Her dress is flaming red and nearly everything else is shaded in the odd light of the moon. There is none of the subtlety or wit that DC would display a decade later—only crime at it’s ugliest. Even Mr. Crime himself is absent from this one!

The stories are almost always rooted in greed, stupidity or arrogance. The writing is clear and very straightforward. No one was showing off with double meanings or emotional depth.

Artist and Writer Howard Chaykin, famed for his work on Blackhawk, American Flagg, and Black Kiss provides a fun and very personal introduction. He helps get to the heart of why the title is so important and so fun.

Between 1942 and until the book’s cancellation in 1955, the title sold in the millions. Its circulation was astounding, right up there with Superman, Captain Marvel, and Walt Disney Comics and Stories.

Dark Horse Archives Series reminds us why Crime Does Not Pay was so popular. Each page is very clear and the colors are rich and deep. At any point you may be laughing at what you see and next, completely repulsed.

What a fun rollercoaster!