The Crime and the Silence: Confronting the Massacre of Jews in Wartime Jedwabne 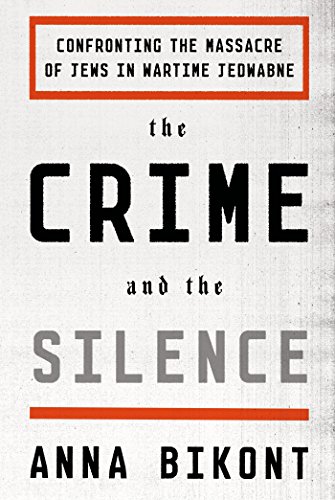 “For me, the hardest thing to bear is not that Jews were massacred in Jedwabne and the area, but that it was done with such cruelty and that the killing gave so much joy.”

A reviewer of fiction and nonfiction about Judaism, World War II, and the Holocaust, would rarely be shocked or frightened by a book. European Jews have been the object of scorn and animosity for centuries’ however, Anna Bikont’s masterpiece, The Crime and the Silence, fills one with apprehension. One is prepared for the brutality and horror from the past. But one is not prepared for the same level of detestation toward Jews in contemporary Poland. This is almost more frightening than the genocide nearly 75 years ago.

On July 10, 1941, the Jewish residents of Jedwabne Poland, numbering at least a thousand, were captured, humiliated, brutalized, tortured, raped, beaten, and herded into a barn by Christian Poles. The doors were locked. Gasoline was poured over the barn, and it was set on fire. Hundreds of Jewish families were burned to death in the conflagration. The very same death awaited the Jews of nearby Radzilow. Almost immediately, Poles looted and occupied the Jews’ dwellings and businesses.

Polish residents claim that the genocide is at the hands of German armed forces, not Poles. A handful of Jews who hid from the tragedy survived, as did a few who had converted to Christianity. They repeat that the massacre at Jedwabne was committed by Poles, not by Germans. Eventually, after a 1949 trial, the highest levels of Polish government agree that it was Poles who committed the atrocity and they later apologize for it publicly.

To understand the crime at Jedwabne, Anna Bikont accesses oral testimonies and she travels the world to interview Jewish survivors and their progeny. She conducts interviews with additional witnesses and their children, with perpetrators and their progeny, and with righteous gentiles. Almost to a person, the same hatred, mistrust, and rage that existed decades ago toward Jews remains within the fabric of contemporary social life in Jedwabne.

The Crime and the Silence is at once haunting, engaging, and revealing. Part memoir, part historical account, this amazing book chronicles the events leading up to and during that fateful day in 1941 when Christian residents of Jedwabne set fire to every Jew that they could find, including women and children. And while there is disagreement about the actual number of Jews burned to death, there is no possibility that it was at the hands of Germans or Einsatzgruppen, who were not in or near Jedwabne at the time of the massacre.

Anna Bikont’s courageous battle to uncover the truth is an uncommonly powerful journalistic effort. Bikont persists even while her own life is threatened. The townspeople of Jedwabne still deny the bloodthirsty acts of their ancestors. When the president of Poland and a representative of the Vatican arrive at the dedication of a memorial to the slain Jews, no one from town is in attendance. They perpetuate a disturbing lie.

The Catholic Church in Jedwabne spews venom at author Bikont, claiming that Jews deserved to die because some had been informants for the Soviets when Russia occupied the area. That barely handful of Jews collaborated with the Soviets seems irrelevant to the town. Church leaders preach that “Jews must be punished for killing Christ.” The central belief in 1941 and today is that Poland is for Christians, not for Jews, despite the fact that Jews have lived there for centuries and that many thousands perished protecting their beloved nation.

The Crime and the Silence is detailed, terrifying, and fascinating. Author Anna Bikont’s effort is heart-rending and humane, a must read for anyone with an interest in history, WWII, culture, and intolerance. She writes with empathy and sensitivity.