The Crate: A Story Of War, A Murder, And Justice 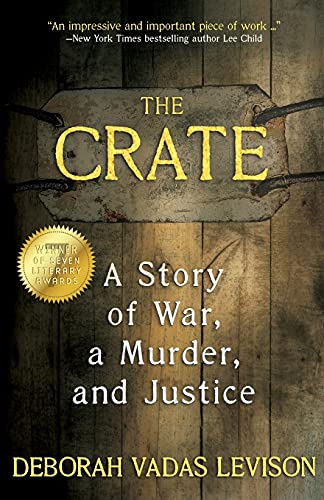 What if a dismembered corpse was discovered underneath your treasured family vacation home? How would you react? Would you flee psychologically and physically, hiding in some safe and secure place, never to return? Or would you become a compulsive researcher of the crime, unsettled until the perpetrator is brought to justice?

What if this true story opens a can of worms so extensive that it carries the author from the fiendish, malevolent murder in Canada deep into the past, when her family in Europe lived under Nazi persecution during the Holocaust?

Canadian police discover a young woman’s body inside of a sealed crate under a cottage next to a lake near Toronto. Her body had been chopped into parts and inserted into large construction casks. The box was sealed so tightly with nails that it could never easily be opened.

This is the true story of a Jewish family from Hungary living in Canada and the United States after the devastation of the Holocaust. The author’s parents, Veronica and Steve Vadas, barely survive the Shoah, raising their family in the Toronto area. Their two children are Peter and his sister Deborah, the author of this book.

After surviving the Holocaust, Veronica and Steve scrimp, save, and purchase a modest house in Toronto. They also find a way to own a cottage not far from Toronto. There, Peter, Deborah and their children grow up in spectacular seclusion. They share holidays and vacations in the family cottage next to a serene lake.

The cottage is an unbroken sanctuary for the Vadas family in a pristine North American forest. It is beautiful beyond words and safe, a deep, iconic Canadian forest surrounding a clear lake, private and austere. Here, formative memories become values. Values become happiness, with children and the rewards of parenthood.

The story begins as Peter and Deborah are in middle age, raising their children and watching their parents age. Peter remains in Canada and becomes a physician. Deborah marries and her family moves to Connecticut. They return regularly to the cottage, providing their own children the same experiences that they had when young.

Upon discovery of the dismembered body, the idyllic cottage takes on a sinister, mendacious tone, no longer pure and innocent. Deborah becomes consumed with the murder, the perpetrator, and the police investigation. She contemplates the victim. Who was she? Did she have parents and/or children? If so, where are they now? What kind of relationship existed with her husband? Was he abusive? Was he the murderer? How and why did the body end up under the Vadas family cottage? There had to be a connection. Deborah is compelled to discover every detail of the murder.

Steadfastly researching details of the murder, Deborah is driven to discover everything about the crime. Simultaneously, she explores the lives of her parents and grandparents, truncated as they were by Nazi Germany and the Holocaust. Like many children of Holocaust survivors, she discovers an abundant strength of purpose that enables many of her immediate family to survive the horror of the Shoah.

During the Holocaust, many family members were murdered by Nazis or their hired thugs in Hungary—the Arrow Cross. Their children and grandchildren were murdered with them. Some were forced to work as slave labor until they died; others were starved to death in Nazi ghettos and camps, or died from rampant disease.

Deborah Levison conveys the reader on a perilous journey through the horrific murder of a young woman whose body was discovered under their cottage, destroying a sacrosanct and idyllic place where she had grown up – a place replete with powerful memories. Her story soon becomes far too enveloping and captivating to escape. The author finds herself deeply entrenched into her family’s Holocaust experiences, which are significant and influential.

Levison is a gifted, insightful and evocative writer. She delivers a brilliant story of murder, intrigue, faith, genocide, and a horrendous murder that shakes the family deep into its roots.

Levison’s parents had endured the ultimate in pain, bigotry, hatred, and murder by surviving the Holocaust. In reaching Canada, they put the animosity and death behind them, finding what they believed was a very serene, safe and beautiful place to raise a family. But they discovered that evil is everywhere. Criminals surrounds us and there is no safe place. Levison captures this for us, emphasizing emotional ties to past and present violence.

Will the perpetrator be caught and brought to justice? For that, you must read the book. You’ll be glad that you did.