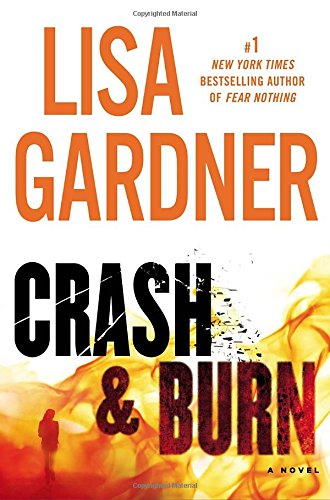 “The problem with asking questions is that you can’t control all the answers. Life is like that. Especially for you and me.”

Nicky Frank, protagonist of Lisa Gardner’s latest police procedural, Crash and Burn, would soon find out the hard truth behind her husband’s declaration.

In Crash and Burn, Gardner has woven a tight, suspenseful tale of a woman whose past has caught up with her in a violent manner, leaving her with traumatic brain injury, suspicion of those around her, and an inability to determine fact from fantasy.

Following a horrific car crash, Nicky’s third “accident” in six months, she is left with nothing but questions about her life, her past, and her seemingly loving husband. And what about the mysterious Vero, the sad six-year-old waif who haunts her dreams and fills her thoughts?

New Hampshire sheriff’s deputy Wyatt Foster, along with his sometimes reluctant girlfriend, private detective Tessa Leoni, are determined to get to the bottom of Nicky’s mysterious past, and to determine if Nicky or her husband, Thomas, is the greater threat.

With labyrinthine twists and surprises on just about every turn of the page, Gardner has crafted a delight of a suspense novel. The characters are vibrant and articulate, well developed and strong. Though this is a stand-alone novel, she includes an effective cameo by one of her most enduring characters, Detective D. D. Warren, which should please her regular readers.

Gardner’s writing is sharp, yet thoughtful; she touches upon topical issues such as spousal abuse and child sex-rings without becoming lurid or exploitative. Still, she pulls no punches when it comes to action. Her clear, expressive writing style makes it quite easy to envision Nicky’s car careening down a rainy, tree-covered hillside, to “see” a house engulfed in flames, or to feel the terror of a child hiding in a closet from her own personal monster.

There has also been great attention given to research for this novel—Gardner’s list of advisors in the endnotes is impressive. From medical advice to engineers and accident reconstruction specialists, Gardner has worked to make sure her physical details are not only convincing, but correct. It is always pleasant to read an author who is willing to do the legwork to get details right.

On the negative side, there was a scenario in the book involving Nicky’s accidents and the reasoning behind them that was hard to swallow. As it was the catalyst for the action of the story, that should have been a bigger problem than it turned out to be; because it only became a kind of nag after the book had ended, though, it wasn’t a deal-breaker when it came to enjoying the novel.

One lovely line (among many) in Crash and Burn sums up the story beautifully: “But it’s not the flying that’s the hard part. It’s the landing, always the landing, that gets us in the end.” With style and grace, Gardiner has given both her characters and the reader a lovely flight with a hard landing. Well worth a read for either the hard-core thriller reader or the general bibliophile.