A Crafter Quilts a Crime: A Handcrafted Mystery 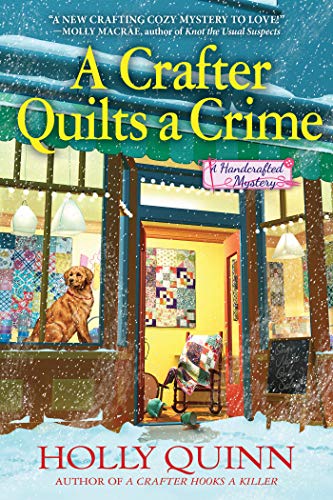 “The story is a good cozy read, and the reader will be challenged to ride along with the characters and try to learn who the criminal is before Sammy does. The reader will not succeed, but it’s a good race.”

Holly Quinn’s new mystery, A Crafter Quilts a Crime, is a good read for an evening of enjoyment.

The third in her Handcrafted Mystery series, the story reintroduces the protagonist, Samantha “Sammy” Kane as the clever and intrepid young woman who can’t seem to keep her nose out of police business—especially when a crime is committed on her doorstep. Or, as in this case, in the front window of her shop, Community Craft.

It’s January in Heartsford, Wisconsin. The holiday season is winding down and the annual post-holiday celebration, the Fire and Ice event, is sure to bring out all of the residents of the small town. Sammy’s goal is to bring those people to her shop to browse and buy, and to encourage them she is holding a live mannequin display where many of her quilters will each pose with their quilted or knit products.

Everything starts out well until Wanda Wadsworth takes her place in the window. She sits at her position and doesn’t’ move at all. She’s perfect as a mannequin—that is until it is discovered that she is dead.

Sammy can’t have this on her turf! She gathers her sister, Ellie, and their cousin, Heidi, (the S.H.E.s) and the investigation into Wanda’s death moves full steam ahead.

Heidi’s boyfriend, Officer Tim Maxwell, is an unwitting participant as he shares police information with Heidi and she, of course, shares it with the others. When everyone thinks that Wanda, a yoga instructor and health nut, may have had a heart attack, it soon becomes known that she was poisoned.

Sammy realizes that the first person to be suspected in such a death is the spouse, but Wanda’s husband Marty has disappeared. And the mystery begins to grow exponentially from here.

The S.H.E.s, with Sammy as the lead, question Wanda’s brother Jackson only to learn that Marty has been kidnapped and is being held for ransom. Jackson doesn’t know where he will get the ransom money from, and he insists that Sammy and her team not share this information with the police. They know better, but they agree.

In the meantime, the local police detective, Liam Nash, a man who holds Sammy’s heart, has encountered problems with the team sticking its collective noses into police business, and he warns them to stop their inquiry. Ah! Were it only that easy!

Problems continue to arise when the team learns that one of the persons of interest is Ellie’s husband Randy. This fact puts Sammy at direct odds with Liam, as Sammy is determined to prove that Randy is as innocent as the day is long . . . or is he?

Clues continue to appear, red herrings come and go, and the S.H.E.s uncover facts that they don’t always share with the police, thus hampering Tim and Liam’s ability to conclude their investigation successfully.

Quinn has some good points of tension in her story including discovering the kidnapping and ransom note, as well as Sammy being kidnapped. Quinn is to be congratulated in her handling of point of view, as she keeps the reader in Sammy’s head throughout the full length of the story. When the true perpetrator is uncovered, the reader is satisfied with the conclusion. And Quinn’s solution is clever and well researched.

It should be noted, however, that there are times when Quinn diverts the reader’s attention with too much detail. She refers to the name of Sammy’s shop (Community Craft) way too many times, and often when it is not necessary. The reader already knows the name of the shop and does not need to have that reinforced over and over again.

There are also moments of diversion when too much detail about a piece of clothing, or a setting, or a plate of food, goes off the deep end, again diverting the reader’s attention away from the story itself.

Nonetheless, the story is a good cozy read, and the reader will be challenged to ride along with the characters and try to learn who the criminal is before Sammy does. The reader will not succeed, but it’s a good race.