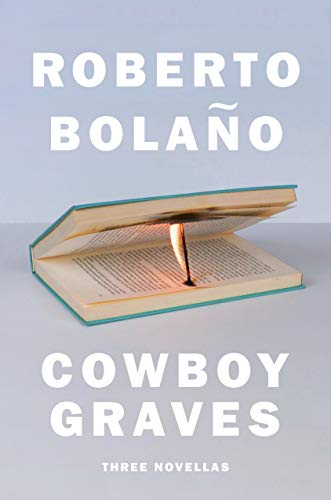 “Cowboy Graves lacks the wild ambition and gravity of Bolaño’s best work, but it’s still a tasty summation of his talents.”

Roberto Bolaño’s prose is inimitable: cheeky and mordant, dancing like a firefly in the blurred spaces between history and memory, fact and imagination, fun and fear. Self-banished from his homeland of Chile for most of his life, adrift alongside expatriates and artists and activists, Bolaño became the artist in exile par excellence, merging tragedy with fantasy in head-spinning novels such as 2666 and The Savage Detectives. Cowboy Graves, a posthumous collection of three novellas compiled from unpublished texts found on Bolaño’s hard drive, finds him in a playful mode, even as he sticks to his unique, twisted world view.

Cowboy Graves concerns literature-obsessed survivors: young punks who grow up to be incompetent rebels, ne’er-do-well poets co-opted by farcical underground organizations, exiles haunted by memories of loss and injustice. Throughout, situations and characters echo his previous works: the search for a missing poet, revelations of wartime atrocities, neurotic artists who delude themselves when they’re not getting misled by others. But if this all rings familiar, Bolaño wouldn’t have it any other way—just like his addled narrators, he forever runs circles in his own head, poring over the chaotic absurdity (and melancholy) of life, his protean voice holding sway as his plots ramble through incidents mundane and strange.

Cowboy Graves’ centerpiece and most sustained entry is its titular story, which charts the misadventures of Arturro, a misfit teen with the usual obsessions: chasing girls, playing hooky from school, getting hooked on pulp movies. Each of the story’s four acts centers on pivotal figures in Arturro’s young life, from his Mexican father to a philosophical hobo to rambunctious fellow travelers. But underneath these affectionate memories, ominous undercurrents percolate. The simple act of visiting his father in Mexico becomes a precarious business when the Chilean authorities prevent him and his mother from leaving the country. An otherwise bacchanalian boat trip brings him back to a homeland on the brink of martial law.

A wistful portrait of a time before madness, “Cowboy Graves” lingers because of what it doesn’t mention: the lives lost, the terrible happenings that take place afterward. The novella foreshadows everything that is to come with its bitterly comedic conclusion during the 1973 Chilean coup d'état, as Arturro is drafted into assisting leftist rebels and finds himself in a Beckett-like impasse with a fellow conspirator when he can’t remember an important password, the two of them playing games even as they’re perched on the edge of a terrible new era beyond their reckoning.

“French Comedy of Horrors” is a more enigmatic affair, chronicling a single evening in a charmingly ramshackle French Guiana town. This time the narrator is a youthful, aimless poet (unpublished, natch) who undergoes seemingly random occurrences: espying a couple dancing away under an eclipse (and blinding themselves in the process); engaging a hee-hee bird in nonsensical conversation; and most memorably, receiving a surprise phone call from a group of clandestine French surrealists.

Committed to preserving the true spirit of surrealism, buried under layers of secrecy, plots and counter plots, the surrealists invite him to join their ranks—as long as he can meet them in France. As with almost everything else in the story, their presence is both inexplicable, and characteristic of a world that’s locked into its own head. More reverie than plot, “French Comedy” hints at the seductive dangers of artistic solipsism, capped off with a return to the hardscrabble reality of the everyday, via a soused street musician.

“Fatherland” concludes the collection in self-reflexive style, told from the point of view of dissident writer “Rigoberto Belano.” (Never let it be said that Bolaño doesn’t poke fun at himself—or blur the line between reality and invention.) “Fatherland” begins as a love story that is incited, and halted, by violence, as Belano meets a woman at a poetry reading that is interrupted by revolution, their subsequent playful flirtations soon overwhelmed by the rising tide of authoritarian rule.

Growing more frenzied and fragmentary as it proceeds, Belano’s narrative is illuminated by others’ anecdotes and images that shine like bejeweled shards: the uncanny sight of an old German Messerschmitt dueling the Chilean Air Force, seen through prison bars; Belano’s family retreating into exile while he stays behind, the Hitchcock film “Family Plot” playing during their plane ride; a discussion of a vulgar poem about “Walt Whitman’s balls” that turns into a rant about Nazis and Amazons.

In the novella’s most devastating passage, it is revealed that Belano’s girlfriend has been “disappeared” along with other activists, the only remaining evidence of her life a white-washed elegy presented by the “Interim Secretary of the Chilean Society of Fine Arts.”

In a hallucinatory side-narrative, the exploits of a poet named Cherniakovski (also known as Víctor Díaz) intrude, as he becomes increasingly obsessed with the seedy extremes of human behavior, including child organ trafficking.

Eventually any sense of narrative closure completely collapses as the novella concludes with half-finished official reports and an interrupted fever dream about a man with a fever. Above all, “Fatherland” is a collision of these incomplete thoughts and voices, all contributing to a jigsaw view of a Chile ruled by chaos, the author’s own rattled mind swept along with it.

As one would expect from a book compiled from unpublished writing, Cowboy Graves lacks the wild ambition and gravity of Bolaño’s best work, but it’s still a tasty summation of his talents, presented in miniature. In its loose, wide-ranging energy, Cowboy Graves is a pleasing epitaph for a literary career that refused to stand still.