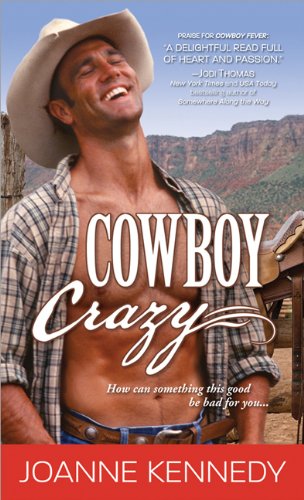 Joanne Kennedy creates the kind of cowboys we wish existed. Her heroes are strong, honest, down to earth, and sexy as all get out. Their flaws are born of their strengths, which keeps them interesting.

Cowboy Crazy, her fifth western romance, pits her cowboy, a rancher and rodeo rider, against an oil company executive. Because Ms. Kennedy writes with a deep understanding of the setting and culture of her adopted state, this clash raises issues beyond those of the individuals involved.

Yet her characters are what draw the reader into Ms. Kennedy’s books. Cowboy Crazy offers an especially appealing hero in Lane Carrigan. Brought up in a life of privilege at fancy boarding schools, Lane preferred his brief vacations on the family’s ranch outside the tiny town of Two Shot, Wyoming. As an adult, he follows his passion and becomes a champion rodeo rider, leaving the running of the family oil business to his younger brother Eric.

Sarah Landon has clawed her way out of a single-wide trailer in Two Shot by studying like a fiend and winning a scholarship to Vassar College. She conceals her upbringing behind a carefully cultivated veneer of sophistication when she lands a job at Carrigan Oil as a public relations expert. She is assigned to mediate the dispute between the brothers over oil drilling rights on the family ranch. Lane owns the ranch; the company owns the mineral rights, and the brothers’ sibling rivalry erupts into a PR disaster.

Both Lane and Sarah have sibling issues, and these conflicts provide much of the emotional depths of the story. Sarah needs the Carrigan Oil job so she can stay close to Two Shot where her younger sister Kelsey lives. Kelsey is a single mother struggling to survive in a town where jobs are scarce. Sarah gives her sister half her salary and babysits on weekends.

Lane and Eric have all the problems of two overachieving brothers vying for a powerful father’s approval. They differentiate themselves on the surface with Eric going the elegant Armani suit route, while Lane is pure cowboy, or as Sarah observes, “a force of nature” in his raw virility. He wants to preserve Two Shot as it is, while Eric wants to bring in the economic vitality of a new industry.

As Sarah comes to realize, they are both right and both wrong. She has her own issues with her childhood in Two Shot. Lane helps her see the town as a positive force in her life, rather than the complicit setting for all the misery and disgrace of her early years. Sarah forces Lane to see a less idealized version of the town he romanticizes.

Ms. Kennedy writes with assurance, grace, and humor about a landscape she clearly loves. At the rodeo grounds, Sarah notices a children’s playground with hobbyhorses, and wryly thinks “why ranch kids would want to ride plastic ponies on springs was anybody’s guess.” The author is especially adept in the scenes involving real horses, bringing them to life with distinct personalities.

Sarah and Lane strike physical sparks from each other immediately, so there are some hot love scenes, including one in the bed of a pickup truck. Perhaps the novel’s only weakness is that these scenes don’t seem to move the relationship forward. This may be because the heart of this novel is in the way two people change each other’s view of the world they live in, rather than in the intensity of the romance.

Cowboy Crazy offers the pleasures of a thoughtful look at the tension between one’s past and present, between progress and preservation, between family and work—all as seen through the eyes of sympathetic, complex, well-developed characters who are falling in love.